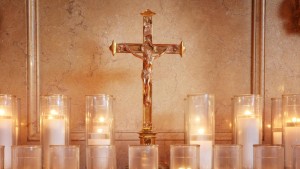 A Memorial Mass for Sister of Charity of Cincinnati Ruth Hunt was celebrated at the motherhouse chapel Dec. 5. Sister Ruth, 89, died Nov. 28 at Mother Margaret Hall. She was a Sister of Charity of Cincinnati for 70 years.
A Cleveland native, Sister Ruth served as an elementary school teacher and principal. In the archdiocese, she ministered at Holy Family, Cincinnati, and St. Brigid, Xenia. She later served at Good Samaritan Hospital, Dayton, the College of Mount St. Joseph, and the Women’s Connection, Cincinnati.
Interment was in the Sisters of Charity cemetery.

A Mass of Christian Burial for Adrian Dominican Sister Alice Marie Wolski was celebrated Dec. 2 at St. Catherine Chapel. Sister Alice, 94, died Nov. 28 at the Dominican Life Center in Adrian, Mich. She was in the 76th year of her religious profession.
A native of Detroit, Sister Alice ministered in elementary and secondary education. In the archdiocese, she served at St. Vincent Ferrer School, Cincinnati.
Interment was in the congregation’s cemetery.

A Mass of Christian Burial for Marianist Sister Audrey Buttner was celebrated Dec. 7 at Queen of Apostles Chapel, Dayton. Sister Audrey, 80, died Nov. 28, in her 61st year of religious life.
A native of Brooklyn, Sister Audrey served in hospitality and care ministries sy St. Albert School, with the Sisters of the Precious Blood, at the University of Dayton, and Good Samaritan Hospital, Dayton.
Sister Audrey is survived by her sister, Virginia. Interment was at Mount St. John, Beavercreek.

A Memorial Mass for Sister of Notre Dame de Namur Virginia Lacy was celebrated Dec. 14 at Mount Notre Dame Health Center. Sister Virginia, 85, died Dec. 1. She was a Sister of Notre Dame de Namur for 67 years.
A Dayton native, Sister Virginia served as the first principal at St. Francis de Sales School, Lebanon. She went on to serve at St. James, Dayton, along with ministering to her congregation’s Ohio Province. She later became an assistant superintendent of schools for the northern area of the archdiocese; served at in pastoral ministry at St. James; and as assistant to the manager at Hoover Place, a senior living community in Dayton.
Interment was in the congregation’s cemetery.