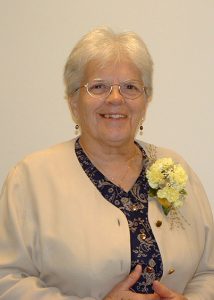 Fifth in line of fourteen 14 children, Nancy Grace was born on October 7, 1939, to Joseph Gerald McMullen and Florence Gertrude (Vellenga) McMullen in Bellefontaine, Ohio. On January 5, 1957, at the age of 17, she formally entered the Congregation of the Sisters of the Precious Blood because, as she said, “I feel it is God’s will for me.” In Religious life she was given the name Sister Mary Ann Patrick and later returned to using her baptismal name.

Sister Nancy was active in many ministries. The first 18 years she taught children in elementary schools in Ind., Ariz., Ohio, Mo. and Va. She was director of religious education in Cincinnati, Ohio, for four years before earning an M.A. in Theology in 1982, after which she taught high school religion in Cincinnati. She then served the Sisters as a Congregational Councilor for four4 years and served as Lay Pastoral Ministry Coordinator for the next 20 years. She then served six years as Council Secretary until her death.

At her 60th Jubilee in 2017, Nancy said, “Belonging to the Sisters of the Precious Blood has brought richness, happiness, and joy to my life.” And she has brought joy to her Sisters, her family and the many, many persons to whom she ministered.

Preceding her in death was her sister, Jane Wittke and her brother Mark who died in infancy. Nancy is survived by her Precious Blood Community of Sisters, her sisters Ruth Borchers and Sandy Carter and her brothers Jack, Tom, Joe, Bob, Paul, Carl, Pat, Fred, and Tim McMullen, as well as other relatives and friends.