DELHI TOWNSHIP, OHIO – Jan. 28, 2020 – Sister of Charity of Cincinnati Julia Mary Deiters died Jan. 24, 2020 at the age of 93 in Mother Margaret Hall, the nursing facility of the Sisters of Charity. Sister Julia Mary was born Rosemary Julia Deiters on March 16, 1926, to Alfred H. and Rose (Rusche) Deiters in Cincinnati, Ohio. She was one of four children. She was a Sister of Charity for 72 years. When making vows she chose the name Julia Mary.

Sister Julia grew up in Cincinnati, attending St. William grade school and Seton High School, graduating in 1944. She went on to attend the College of Mount St. Joseph (Cincinnati). She was taught by the Sisters of Charity for all sixteen years. Following her junior year Sister Julia chose to enter the Sister of Charity Congregation on Sept. 14, 1947. In becoming a Sister of Charity she wanted to see the work of the Spirit active in the world, especially among the poor.

It was at this time that Sister Julia was invited by the Dominican Sisters of the Sick Poor to help adults improve their skills, receive their G.E.D. and acquire gainful employment. The summer of 1975 she volunteered at the Mennonites’ HUB Services in Over-the-Rhine (Cincinnati). This experience changed the focus of her ministry. She soon found that there were few programs in adult education and a great need. She wrote grants and went to work, giving her mornings to Seton students and her afternoons to the adults (1975-’78). Next she moved on to the Terrace Guild Adult Education Program in Winton Hills, also in Cincinnati, directing that program from 1979 until 2002. In 1984 she opened another site in North Fairmount. As a true educator, all along the way, she encouraged staff volunteers to participate in appropriate workshops to become familiar with new approaches to serving adult students. She helped found the Ohio Literacy Network and the Literacy Network of Greater Cincinnati.

Sister Julia assisted state and local legislators to realize the importance of education programs for the local economy, providing competent workers who have basic skills. “The Spirit moved me into this,” she once said, “I had no idea how it would develop.” All of these programs were in areas of high unemployment, high welfare dependency and high school drop-out rates. They provided an opportunity to make up for dropping out of school and a chance to continue their education, develop their full potential as individuals, secure successful employment and assume their rightful place as family role models and active participants in society. Through all the funding crises, Sister Julia maintained the programs even though there might have to be a reduction in hours and services; she continued grant-writing. Her programs provided a wholistic curriculum that included computer basics and life skills, especially interpersonal, relational skills. She insisted that these skills were necessary for successful employment and for strengthening communities. Sister Julia also assisted in founding the Genesis Men’s Program in 1993 working to break the cycle of poverty, unemployment and incarceration among men living in the inner-city neighborhoods of Cincinnati, including one at the Justice Center.

Sister Julia was the recipient of numerous awards; in 2002 she was one of 10 named Cincinnati Enquirer Woman of the Year and in 1997 she received the St. Elizabeth Seton Award from the Sisters of Charity of Cincinnati for her persistent approach to adult education and dedication to the Mission. She exercised her leadership quietly, but firmly. She saw us as a nation wasting human potential and she sought to remedy this. Many Sisters of Charity joined her in this endeavor, volunteering beside her throughout the years.

Associate Dave Scharfenberger first met Sister Julia 35 years ago when she was in charge of the GED Program at Terrace Guild. He remembered, “Sister Julia was such a warm, loving person who always showed an interest in others. Whenever I stopped by her room in Mother Margaret Hall or saw her at some activity, she was always glad to see me and gave me a warm welcome. I could tell how much she loved her work [at Terrace Guild] and helping residents from the neighborhood learn and discover their talents. She demonstrated a love for the people and commitment towards helping others. Sister Julia is certainly one of the many great women in the Sisters of Charity who lived out the Charity Charism and provided such a model for so many of us. I am thankful for having known her.”

Sister Julia is survived by a brother Rev. Robert Deiters, SJ, and Sister of Charity Joan Deiters as well as nieces and nephews. She was preceded in death by her brother Paul Deiters.

Sisters, family and friends will greet visitors in the Heritage Room of the Sisters of Charity Motherhouse from 2-3 p.m. on Friday, Jan. 31, 2020. A Memorial Mass will follow at 3 p.m. in the Motherhouse chapel. Sister Julia has chosen to donate her body to science; burial will occur at a later date.

Memorials can be made in Sister Julia Mary Deiters’ name to the Sisters of Charity of Cincinnati Retirement Fund, 5900 Delhi Rd., Mount St. Joseph, Ohio 45051.

Building walls to keep immigrants out is not Christian, pope says 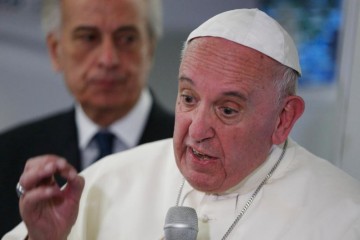