DELHI TOWNSHIP, OHIO – Jan. 23, 2020 – Sister of Charity of Cincinnati Rose Therese Wich died Jan. 14, 2020, at the age of 93 in Mother Margaret Hall, the nursing facility of the Sisters of Charity. Sister Rose Therese was born Rose Marie Wich on Aug. 26, 1926, to John Paul and Amelia (Foertsch) Wich in Chicago, Illinois. She was the youngest of three children. She was a Sister of Charity for 75 years.

Sister Rose Therese earned a Bachelor of Arts degree in English from the College of Mount St. Joseph, Cincinnati, Ohio in 1956 and a Master of Education from Creighton University, Omaha, Nebraska, in 1962.

Sister Rose Therese’s ministries cover more than 65 years; 59 being in education as teacher, counselor, principal and administrator. She spent seven more in social services as a Catholic Charities volunteer. Sister Rose Therese taught at Holy Trinity, Trinidad, Colorado, beginning in 1946; remaining in the West she went to St. Mary, Albuquerque, New Mexico in 1952 and then to St. Joseph, Springfield, Ohio in 1955. Sister Rose Therese moved to teaching high school English at Seton High School, Pueblo, Colorado in 1956 where she remained until 1959 when she became an English teacher at her former high school, Cathedral, Denver; she would be back there from 1967-’69. In between she taught English at Catholic Central High School, Springfield, Ohio, 1966-’67. In 1969 Sister Rose Therese changed to elementary administration at St. Mary, Albuquerque, New Mexico, serving in that capacity until 1979. Next she taught English at St. Pius X High School, Albuquerque, followed by three years at Trinidad Catholic High School, Trinidad as administrator (1980-’83). The remainder of her years in ministry would be lived out in New Mexico as administrator of St. Mary Jr. High (1983-’84); St. Joseph Rio Grande, administrator (1984-’88); St. Pius X High, counselor and English teacher (1988-’89); and Our Lady of Annunciation, elementary principal, (1989-2005).

In retirement, at the age of 80, Sister Rose Therese continued her service, now as the senior transportation coordinator at the Center for Community Involvement in the Archdiocese of Santa Fe, New Mexico. There she coordinated rides for seniors who were homebound. In 2012 Sister Rose Therese was a finalist for the Volunteer of the Year for Catholic Charities USA. In her nomination the Catholic Charities personnel stated, “Sister Rose is known for the loving manner in which she treats those around her. She is the consummate professional, responding to the seniors’ requests with patience and respect and always ending each conversation with a blessing. She enhances and enriches the lives of seniors on a daily basis.”

When Sister Rose Therese moved to the SC Motherhouse in the summer of 2012 she enjoyed reconnecting with her Sister friends and meeting new ones. She found joy in doing art, reading and praying. Of her many years in the classroom she would say, “St. John’s tenth chapter on the Good Shepherd has been the voice from within that has inspired me to be an educator and to minister to God’s children. Shepherding the flock began when I first walked into the classroom in 1946 in Trinidad, Colorado. It was love at first sight; I knew this was where God wanted me.”

Sister Rose Therese is survived by nieces and nephews. She was preceded in death by her two brothers George and Lionel Wich.

Sisters and friends will greet visitors in the Heritage Room of Sister of Charity Motherhouse from 2-3 p.m. on Tuesday, Jan. 28, 2020, followed by the Mass of Christian Burial at 3 p.m. in the Motherhouse chapel. Burial will be in the Sisters of Charity cemetery.

Memorials can be made in Sister Rose Therese Wich’s name to the Sisters of Charity of Cincinnati Retirement Fund, 5900 Delhi Rd., Mount St. Joseph, Ohio, 45051. 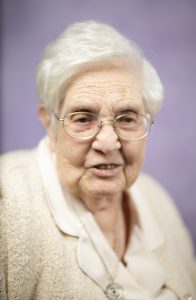