Singer and actress Olivia Newton-John, perhaps best known for her role as Sandy Olsson in the 1978 film “Grease,” shared her favorite prayer last year. She passed away Monday at age 73.

The prayer was, she revealed in a 2021 interview, the Lord’s Prayer.

She began reciting it daily after she became pregnant with her only child, Chloe, she said on the podcast “A Life of Greatness.”

“I was close to losing her at one point,” she recalled. “I asked God to please save Chloe and, if he did, I would say the Lord’s Prayer every night for the rest of my life.”

“So I have,” she said. “I think it’s a beautiful prayer. It’s a powerful prayer. I believe in prayer, I think prayer is very powerful.” Chloe was born in 1986.

Newton-John learned the Lord’s Prayer as a child, she said, adding that her family attended church while her father served as the head of a Presbyterian college — Ormond College at the University of Melbourne in Australia.

“I believe all the beliefs have validity and meaning to a lot of people,” she added, “but I find that prayer a very powerful one.”

In response to her death, which came after a decades-long struggle with breast cancer, Capuchin friar and deacon Brother Vince Mary remembered Newton-John on Twitter. He shared that Newton-John attended Catholic Mass.

“She was a frequent visitor to our Capuchin Novitiate in Santa Ynez for masses,” Brother Vince Mary tweeted. “God grant her eternal rest!”

He told CNA that Newton-John attended Mass frequently at the novitiate that has attracted other celebrity visitors — San Lorenzo Seminary in Santa Ynez, California.

Newton-John lived near the friars. According to the Santa Barbara Independent, she passed away at her 12-acre residence in Santa Ynez Valley.

In March 2020, she publicly shared her appreciation for one Capuchin Franciscan. Newton-John posted a poem on Instagram written by a Capuchin Franciscan in Ireland, Brother Richard Hendrick, where he wrote about responding to the COVID-19 pandemic.

“I was sent this poem by a friend and it said many things I was thinking — because I also believe that good things are coming out of this difficult time — which too will pass,” she commented. “Father Richard Hendricks says it so beautifully here.”

It is unclear what faith or religion Newton-John practiced before her death. During the 2021 podcast interview, she spoke about praying and chanting with her friends who are Buddhist and about experiencing spirits.

She also talked about life after death.

“Most humans, we want to believe that we go on,” she said. “I don’t know if that is so and I hope that I can let people know when it happens if it is.” 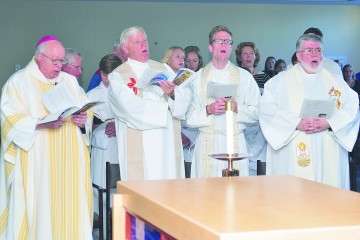