Heaven never tires from pursuing our hearts through the saints and different titles of Jesus and Mary. If you’re drawn to certain saints or holy titles, consider it a nudge to the soul from the Holy Spirit.

I once got lost driving through the middle of nowhere in southernmost Louisiana. Relying on a stranger’s scribbled directions, I was turned around and not sure how to arrive at my destination. Aside from the paved two-lane highways, no signs of civilization were in sight. My hope dragged with the miles as I searched for some directional marker.

In time, what looked like a bell tower broke the horizon and, as I neared the sight, I discovered Our Lady Star of the Sea Catholic Church. Since I was little, my mom taught me to stop at Catholic Churches in my path to say hello to Jesus before going on my way, so I was relieved and excited to find this place of soulful rest where I could reorient myself.

Our Lady Star of the Sea is an ancient title for Mary, but was a new one to me at that time. I prayed in the church and walked among the cemetery’s Church Suffering, found a new route and went on my way.

At home several weeks later, I searched online for “Star of the Sea” and a handful of images appeared, displaying Mary standing on or near the water, her head adorned by a single star. And my heart was drawn to this name and depiction of Mary.

“Do you have a favorite image of Mary?” I asked my husband, Andrew. “There’s a picture of her on a beach,” he said, “and she’s holding baby Jesus and there are waves and stars.” Jaw on the floor, I turned my screen to face him. “You mean this one?” I asked. We had separately stumbled on the same obscure image within days of each other.

Stella Maris, or the Star of the Sea, continued appearing in both our lives, so that we felt greatly loved under this title of Mary and returned the favor through what is now a family-wide devotion to her. In a landlocked state, our home bears several Stella Maris images, and we conclude mealtime and bedtime prayers by asking for her intercession: “Our Lady Star of the Sea, pray for us.” My husband’s video company is called Stella Productions and I made a Marian consecration under that particular title.

Of course, it’s not the title, but the meaning of Stella Maris that carries our souls so aptly. Perpetually pointing us toward her Son, Mary is a guide and example in the Christian life. She is a constant, whether life goes merrily along or inflicts battering storms, and she is a humble light when everything seems dark.

When you feel drawn to a saint or a particular title of Mary, bring that saint’s images into your home and ask for his or her intercession daily. Read biographies and the saint’s own writings to learn his or her challenges, victories and prayer intentions.

In His wisdom, God blesses us through friendships with the saints while we journey towards our heavenly home, supporting us with those who wear an imperishable crown. Dive fully into these relationships to discover love and devotion to last an eternity.

Katie Sciba is a national speaker and Catholic Press Award- winning columnist. Katie has been married for 14 years and is blessed with six children. 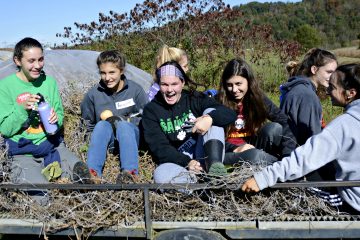