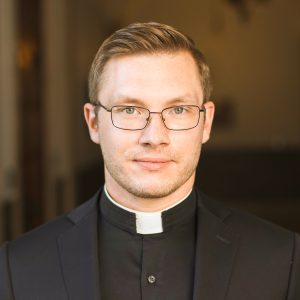 I grew up in a military family. Both of my parents served in the Air Force, and my dad made a career out of it, so my brother, sister and I moved around quite a bit. When he was assigned to Wright- Patterson Air Force Base, we settled in Springboro and became parishioners at St. Mary Parish in Franklin (now St. Mary of the Assumption, Springboro). My parents, now retired, and my sister, a physician at Dayton Children’s Hospital, still attend Mass there. My brother is currently serving in the Space Force in Washington, D.C.

WHEN DID YOU FIRST DISCERN YOUR VOCATION?

I first began discerning the priesthood while I was a Sophomore in high school and began taking my Catholic faith more seriously.

WHO HAS BEEN A MENTOR FOR YOU?

I have had a number of great mentors along the way. One in particular was my Catholic chaplain, Father Chad Zielinski (now Bishop of Fairbanks), while I was a cadet at the Air Force Academy. During my time there, he deployed to the Middle East and learning about the tremendous sacrifices he made and the ministry of bringing the sacraments to servicemen and women who had no other access was incredibly affecting.

WHAT ARE YOU LOOKING FORWARD TO MOST ABOUT BEING A PRIEST?

I am most looking forward to being able to say Mass, bringing our Lord to the faithful through the sacrifice of the altar, as well as to serving them when I receive my first assignment from the archbishop.

WHAT ARE YOUR FAVORITE DEVOTIONS OR PRAYERS?

Over the years, especially because of my future service as an Air Force chaplain, I have developed a devotion to Servants of God Father Emil Kapaun and Father Vincent Capodanno, both of whom were military chaplains whose causes for canonization are underway.

WHAT’S A HOBBY OR ACTIVITY YOU ENJOY?

Years ago, I took up the hobby of repairing vintage mechanical watches. It takes some patience and focus (and often a little frustration), but it is a great way to clear my mind, and they make great personalized gifts.

I would simply express my deep gratitude to all of the faithful who have supported my vocation over the years through their prayers and generosity, and I would ask that they continue to pray for me as I begin priestly ministry

On May 15, Seven Men Will be Ordained to the Priesthood and Begin Their Service in the Archdiocese of Cincinnati

Question of Faith: What is the Deacon's role in the Church? 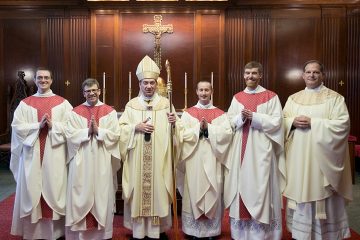