Archbishop Lori: Knights of Columbus must be at the forefront of Eucharistic renewal

The Vatican’s human development office has created a working group on the topic of the expulsion of criminal organizations from the Catholic Church.

The group was created in honor of Rosario Livatino, a Catholic judge killed by the mafia in Sicily in 1990, who was beatified in the Cathedral of Agrigento May 9.

The eight-member group will study the excommunication of the mafia, offering support to bishops around the world, according to a press release announcing the initiative from the Dicastery for the Promotion of Integral Human Development.

Giuseppe Pignatone, president of the Vatican City State Tribunal, will be a member of the group. Pignatone is an Italian magistrate who served as deputy public prosecutor in Palermo and then public prosecutor in the cities of Reggio Calabria and Rome, where he oversaw the arrests and trials of a large number of people belonging to organized crime organizations.

Grimaldi has served as a prison chaplain for more than 20 years and helped rehabilitate the man behind the 1990 murder of Bl. Rosario Livatino. Antonio Gallea, then 20 years old and a leader of the Agrigento-based Stidda, was convicted and sentenced to life imprisonment for the murder.

In 2015, the court granted Gallea parole for good behavior and Grimaldi supported the ex-mafia boss’ reform and reintegration into society.

Gallea also gave testimony during the diocesan phase of Livatino’s beatification cause but was arrested in February on accusations that he is again leading the Stidda.

Grimaldi was saddened to learn that the man he had known for 11 years may have returned to criminal activity.

“It is a great disappointment, I had given him all my trust,” Grimaldi said, according to Avvenire, the newspaper of the Italian bishops’ conference.

“But that doesn’t change our mission. I do not give up. Paths to rehabilitation and reintegration must always be offered to inmates. A story like this cannot put all those who really want to make a path of change in a bad light,” he said.

The priest said: “I followed him spiritually, he came to Mass and to prayer meetings. He asked me for advice and I as a spiritual father did everything for him. I am a priest, I must give strength to resume the journey. That’s why I’m so disappointed now. But I’m praying for him.”

On the day of Rosario Livatino’s beatification, May 9, Pope Francis called the young judge “a martyr of justice and faith.”

“He always placed his work ‘under the protection of God’; for this, he became a witness of the Gospel until his heroic death. May his example be for everyone, especially magistrates, an incentive to be loyal defenders of the law and liberty,” the pope said at the end of his Regina Caeli address.

Livatino worked as a prosecutor in Sicily dealing with the criminal activity of the mafia throughout the 1980s. He confronted what Italians later called the “Tangentopoli,” the system of mafia bribes and kickbacks given for public works contracts.

At the age of 37, he served as a judge at the Court of Agrigento.

He was driving unescorted toward the Agrigento courthouse when another car hit his vehicle, sending him off the road. He ran from the crashed vehicle into a field, but was shot in the back and then killed by more gunshots.

Today a plaque on the highway marks the spot where Livatino was killed. It reads: “Martyr of justice.” On Dec. 21, Pope Francis elevated this title when he recognized the judge as a martyr killed “in hatred of the faith.” 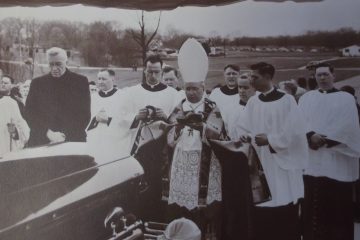