An Illinois priest has alleged that Cardinal Blase Cupich, Archbishop of Chicago, ordered him to cease praying the Prayer to St. Michael and the Hail Mary publicly after Mass, but the church’s pastor says the allegation is not true.

Rumors started after social media posts pointed to an announcement at a livestreamed Mass at St. Joseph Catholic Church in Libertyville, Illinois.

In the video, which has now been removed, Father Emanuel Torres-Fuentes, the associate pastor, said that upon the request of Cupich, prayers to St. Michael and the Hail Mary at the end of the Mass had to stop.

“Following the directive of Cardinal Cupich, we want to remind everyone that the prayer to Saint Michael is not to be said publicly following Mass,” says Torres-Fuentes in the video. This devotional prayer may be recited privately while being respectful of others in the church. Okay?”

“And also, you realize that I like to say Hail Mary at the end of the Eucharist. But now I was told to sing instead of the Hail Mary,” he said.

“I was reflecting on this. Now, I say okay. That’s okay. If Cardinal Cupich says this, I have to do it. Alright? But at peace. Okay? Thank you,” he said.

The statement said: “The faithful are always welcome to gather in Church for personal prayer as individual or as a group. At the same time, in accord with sound liturgical practice and in keeping with archdiocesan norms, which I personally confirmed with the Cardinal, the recitation of prayers must never interfere with, interrupt or distract from the public liturgy of the Church.”

Fr. Trout continued: “Nor can it ever become an imposition on the rest of the faithful in the Church who have a right to remain at the end of Mass to pray privately as they wish. It is also important that such prayers must always foster the unity of the Church, which is guaranteed by the Successor of Peter, for whom we never fail to show our deepest respect and devoted support as our Holy Father.”

The statement concludes by stating that Torres-Fuentes “wishes to state that he misspoke at a recent Mass when he falsely attributed statements to Cardinal Cupich. For this reason the video of that Mass has been removed to avoid any confusion.”

Said in succession, one can recite the St. Michael’s prayer and the Hail Mary in less than one minute. The wording of the St. Michael’s prayer is as follows: Saint Michael, the Archangel, defend us in battle; be our protection against the wickedness and snares of the devil. May God rebuke him, we humbly pray, and do thou, O prince of the heavenly host, by the power of God, thrust into Hell, Satan and all the other evil spirits, who prowl throughout the world, seeking the ruin of souls. Amen.

Pope Francis has recommended at various times that the faithful pray the St. Michael prayer, but its renewed use after Mass in many parishes has stirred debate about whether such a practice is liturgically appropriate.

CNA asked Torres-Fuentes in an email who gave him the directive to cease the Prayer to St. Michael and the Hail Mary after Mass, but received no response.

Since the video of Torres-Fuentes’s statement went viral, CNA spoke to parishioners who described the circumstances.

Dan Love, a parishioner who attends daily Mass at St. Joseph’s told CNA in a phone call on Saturday that recently several parishioners began to recite the Prayer to Saint Michael after Mass publicly. He told CNA that because several of the parishioners were reciting it publicly, the rest of the attendees joined in.

“I think some parishioners just started it,” said Love, who is also a member of the local Knights of Columbus (KofC). “I guess the question is what are they praying for protection from?”

Consistently after daily Mass—which are livestreamed on Facebook—Torres-Fuentes leads the congregation in the Hail Mary prayer. The livestreams do not show the associate pastor leading the congregation or participating in the Prayer to Saint Michael.

Love mentioned a member of his KofC council who is in South Africa being “rampaged by the pandemic.”

“They’re fighting over food because there’s no food and people don’t have any money,” Love said. “So we’re trying to help him financially. So there’s more important calls for us as Catholics around the world than it is worried about this three or four people who can’t say the St. Michael prayer after Mass. That’s my opinion.”

Love told CNA he did not know the reasoning behind stopping the Hail Mary after Mass.

A parish secretary on Friday told CNA that Torres-Fuentes had a meeting with Cupich. Love told CNA the meeting was a luncheon with other priests and was planned weeks in advance. He mentioned that the purpose was not for Torres-Fuentes to dialogue with Cupich about the prayer announcement.

After contacting other priests in the diocese, CNA found that there was no directive sent to all parishes in the diocese referring to the recitation of the Prayer to Saint Michael or the Hail Mary following Mass.

The diocese did not respond to requests from CNA for comment.

Pope Francis urges Catholics to pray and fast for Afghanistan

Prayer for Louisiana Residents in the path of Hurricane Ida 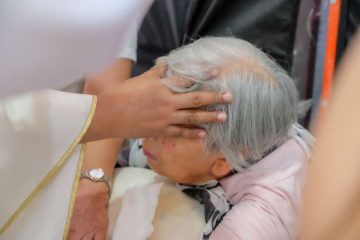