By Courtney Mares Vatican City, Jan 1, 2020 / 06:00 am (CNA).- Pope Francis apologized Wednesday for losing his patience with a woman who grabbed his arm in St. Peter’s Square on New Year’s Eve.

“Many times we lose our patience; me too. I apologize for yesterday’s bad example,” Pope Francis in a departure from his prepared remarks for the Angelus prayer Jan. 1.

While greeting the crowd in front of the Vatican nativity scene Dec. 31, a woman yanked the pope’s arm. Visibly upset, Pope Francis slapped her hand and walked away frustrated.

After his impromptu apology, the pope said that contemplating the nativity scene helps one to see with the eyes of faith a vision of “the renewed world, freed from the dominion of evil and placed under the royal lordship of Christ, the Child who lies in the manger.”

Christ’s salvation involves the “patience of love,” he said. “Love makes us patient.”

“Dear brothers and sisters, let us descend from the pedestals of our pride – we all have the temptation of pride – and ask the blessing of the Holy Mother of God, the humble Mother of God,” Pope Francis said in his Angelus address.

Earlier on Jan. 1, the pope celebrated Mass in St. Peter’s Basilica for the Solemnity of the Blessed Virgin Mary, the Mother of God, a holy day of obligation in the Church.

Pope Francis said in his homily that the Church finds its unity in the Blessed Virgin Mary. He prayed, asking the Mother of God to bring unity among Catholics.

“The enemy of our human nature, the devil, seeks instead to divide, to highlight differences, ideologies, partisan thinking and parties,” he said.

“As her sons and daughters, invoke today the Mother of God, who gathers us together as a people of believers. O Mother, give birth to hope within us and bring us unity,” the pope prayed.

Celebrating Catholic Schools Week A Note From the Superintendent 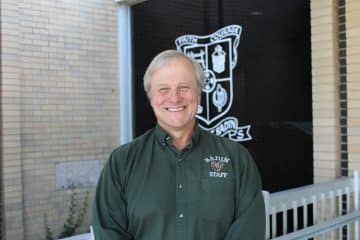