Pope Francis: the Immaculate Conception is ‘one of the wonders of the story of salvation’

Vatican City, Dec 8, 2020 / 06:20 am MT (CNA).- The Immaculate Conception is “one of the wonders of the story of salvation,” Pope Francis said in his Angelus address Tuesday.

Speaking from a window overlooking St. Peter’s Square Dec. 8, the Solemnity of the Immaculate Conception, the pope encouraged Catholics to entrust themselves to Mary, seeking purity and holiness.

He said: “The uncontaminated beauty of our Mother is incomparable, but at the same time it attracts us. Let us entrust ourselves to her and say ‘no’ to sin and ‘yes’ to Grace once and for all.”

It is customary for the pope to lead the Angelus prayer not only on Sundays, but also on Marian solemnities. In his address, the pope reflected on the meaning of the Immaculate Conception.

“Today’s liturgical feast celebrates one of the wonders of the story of salvation: the Immaculate Conception of the Virgin Mary. Even she was saved by Christ, but in an extraordinary way, because God wanted that the mother of His Son not be touched by the misery of sin from the moment of her conception,” he said.

“And so, for the entire course of her earthly life, Mary was free from any stain of sin, she was the ‘full of grace’ (Luke 1:28), as the angel called her. She was favored by a singular action of the Holy Spirit so as to always remain in perfect relationship with her Son, Jesus. Rather, she was Jesus’s disciple: His Mother and disciple. But there was no sin in her.”

Citing the hymn that opens St. Paul’s Letter to the Ephesians, the pope said that we too are created by God for the “fullness of holiness” granted to Mary from the beginning.

“And what Mary had from the beginning will be ours in the end, after we have passed through the purifying ‘bath’ of God’s grace,” he said.

“What opens the gates of paradise to us is God’s grace, received by us with faithfulness.”

Yet even the most innocent person is marked by original sin, he said, and therefore must engage in a lifelong struggle against its consequences. Lest we be discouraged, we should remember that the thief who was crucified beside Jesus “is the first person we are sure entered paradise,” the pope noted.

He continued: “But be careful. It does not pay to be clever — to continually postpone a serious evaluation of one’s own life, taking advantage of the Lord’s patience. He is patient. He waits for us, He is always ready to give us grace. We may be able to deceive people, but not God; He knows our hearts better than we ourselves do.”

“Let us take advantage of the present moment! This, yes, is the Christian sense of seizing the day. To not enjoy life in each passing moment — no, this is the worldly sense. But to seize today, to say ‘no’ to evil and ‘yes’ to God, to open oneself to His grace.”

The pope said that the “journey of conversion” begins with seeking God’s forgiveness in the Sacrament of Reconciliation. We must then seek to repair the harm we have done to others.

“And this, for us, is the path for becoming ‘holy and immaculate,’” he explained.

After the Angelus, the Holy Father greeted pilgrims in the square below, which was wet following a rainy morning. He singled out an Italian group holding a banner proclaiming “L’Immacolata vincerà” (“The Immaculate will triumph”). The group, inspired by the spirituality of St. Maximilian Kolbe, has brought the banner to St. Peter’s Square for the Angelus since the 1990s.

“They are great, they are always here!” the pope commented.

He continued: “As you know, this afternoon the traditional veneration of the Immaculate Conception in Piazza di Spagna will not take place, to avoid the risk of a crowd gathering, as disposed by the civil authorities, whom we need to obey.”

“But this does not keep us from offering our Mother the flowers that she enjoys the most: prayer, penance, a heart open to grace.”

The pope recalled that that morning he had made a private visit to the statue of the Immaculate Conception in Rome’s Piazza di Spagna and then celebrated Mass at the Basilica of St. Mary Major.

“I wish everyone a happy feast day. And, please do not forget to pray for me,” he said.

Pope Francis: the Immaculate Conception is ‘one of the wonders of the story of salvation’ 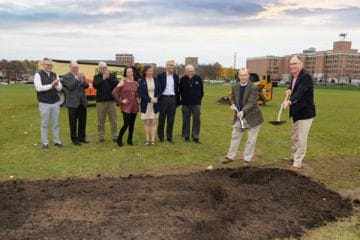