Pope Francis: Youth are lost in a ‘virtual world’, instead of reality 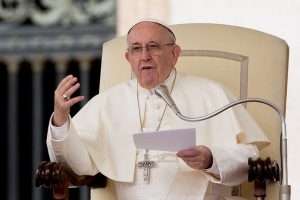 Rome, Italy, May 14, 2018 (CNA/EWTN News).- Pope Francis said Monday he is worried that youth are too enmeshed in a virtual world of cell phones and other technology, separated, in particular, from the real human contact experienced by performing works of mercy.

Answering a question about youth during a visit with the people of the Diocese of Rome May 14, the pope said that the works of mercy “help young people so much,” because they them to be grounded in “concreteness” and to “enter into a social relationship.”

“It worries me that they communicate and live in the virtual world,” he said, noting that on a recent visit with youth, instead of extending their hands when they saw him, they “greeted” him with their phones held up, taking photos and selfies.

“Their reality is that… not human contact. This is serious,” he continued. “We have to make young people ‘land’ in the real world. Touch reality. Without destroying the good things the virtual world can have,” because some things are needed, he acknowledged.

Pope Francis spoke during a visit to the cathedral of Rome, the Archbasilica of St. John Lateran, for a moment of prayer and to hear about the activities of the diocese. The encounter included Rome’s bishops, priests, religious, and members of the laity, among them representatives of the Catholic schools and various groups.

During the visit, the pope answered four questions, among them a question about young people and what he thought about the pre-synod meeting of over 300 young adults which took place in Rome in March ahead of the Synod of Bishops on young people and discernment.

He said that he had a good impression of the pre-synodal meeting and noted the participants’ hard work during the week to create the pre-synod document, which he said was “very beautiful… strong.”

The young people present “had courage to speak” and “really wanted to speak seriously,” he said.

Immediately following the Q&A, the pope gave a prepared speech, in which he spoke about what Catholics can learn from the Israelite’s exodus from slavery in Egypt to the Promised Land.

“The story of Exodus speaks of slavery, of an exit, of a passage, of an alliance, of a temptation and an entrance. But it is a journey,” he said.

The pope’s meeting with the Diocese of Rome concluded a period of reflection by the parishes and prefectures of Rome on “spiritual diseases,” which was begun during Lent.

“As you will have understood, I am inviting you to undertake another stage of the journey of the Church of Rome,” he said. “In a certain sense a new exodus, a new departure, which renews our identity as God’s people, without regrets for what we must leave.”

This period of self-reflection should lead to discernment of where God is present, even “in very ordinary forms of holiness,” he said, such as those people who are already living the Gospel in friendship with the Lord.

It will also be necessary, he continued, to listen to the cry of the people, as Moses was urged to do, “knowing how to interpret, in the light of the Word of God, the social and cultural phenomena in which you are immersed.”

Reflecting on weaknesses and sharing those with others may take time, Francis said, but having done it, Catholic communities and individuals are better prepared to serve others because they have felt and experienced the “gift of mercy and fullness of life for us and for all.”

The pope explained that Christ has loved everyone and continues to love everyone, demonstrating his care for people’s lives, that they are not “creatures abandoned to their destiny and their slavery. That everything is for our conversion and for our good.”

He also stated that Catholics should understand the truth that God did not make any mistake in putting him or her in this place at this time and with these challenges, and that if they find themselves “in a condition of slavery,” it was brought about by a dependence on created things.

The journey to the Promised Land was long for the Israelites – “40 years, eh?” – but they did not get tired, he said, inviting the Catholics of Rome to “spend some time” preparing to “reach the new land that the column of cloud and fire” will reveal.

“New conditions of life and pastoral action… To no longer be afraid of what we are and of the gift we have, but to make it fruitful,” he urged.

Steve Trosley for May: "Rerum novarum for millennial workers"

Parishes grow only when people are welcomed, heard, pope says

Pope Francis: Youth are lost in a ‘virtual world’, instead of reality