Steve Trosley for May: “Rerum novarum for millennial workers”

“I thank them every other Thursday when I sign their paychecks,” my boss said, deflating an enthusiastic employee relations seminar leader, who was making the case for management demonstrating more appreciation for workers.

He took a more humane approach than his comment signaled, but as a manager, he could have used a lesson on “Rerum novarum” (On capital and labor), an encyclical issued by Pope Leo XIII on May 15, 1891.

While Pope Leo’s magnum opus is most often applied with enthusiasm by social justice advocates to the responsibilities of management, he also had some guidelines for labor that bear consideration in this high-tech era. Some of the duties of workers Pope Leo cited include “fully and faithfully” to perform their agreed-upon tasks, individually, to refrain from vandalism or personal attacks, collectively, to refrain from rioting and violence.

So when we read about government workers exchanging more than 500 text messages about their love lives or private political activities during the work day, is that fully and faithfully performing the agreed-upon tasks? Or when a co-worker emails us news of a great bargain found on Amazon during working hours so we can place our order, too – is that fully and faithfully performing? And when we share internal information on social media with a snide remark about our organization’s leadership, is that not a form of vandalism or a personal attack?

That doesn’t mean management doesn’t have its responsibilities in this age of high-tech communications. Pope Leo said management should to provide work suited to each person’s strength, gender, and age, and needed to respect the dignity of workers and not regard them as bondsmen (slaves.)

There’s a TV commercial playing right now showing a young woman awaking to an alert on her smart phone late at night. Her boss has left an email asking her to perform some task – and it can’t wait until she wakes up. Some managers have used the ability for instant communication to turn their employees into “bondsmen,” sending emails and text messages at all hours of the day. This has gotten so extreme that some countries (France) and state legislatures have passed laws making it illegal to require a response to an email outside of work hours.

My father worked in an oil refinery. He had 30 minutes for lunch each day, noon to 12:30 p.m. One of my fondest memories is that he would call home around 12:25 p.m. each workday to speak to my mom. He was always back at work at 12:30 p.m. The telephone was the technology of the 1950s and1960s. It would never have occurred to him to call at any other time – during work time.

With today’s smart phones, Muffin can call mom at work when she can’t find her favorite sweater and Buster can call six times to remind her to pick him up after his lacrosse practice. We can also surf the internet, watch a movie, or listen to a podcast or a collection of favorite tunes, weigh-in on a political debate, comment on a current event, post a review of a product, look at who’s hiring people with your skill set or exchange recipes with a neighbor – the list is endless. And it’s a wonderful way to refresh when we’re on a break from work, but not so when we’re actually supposed to be working.

And bringing “Rerum novarum” up to date for management means it needs to respect workers’ personal time as much as they expect the workers to respect the time they owe to the company.

The technology that serves us – and that we serve – enables us to achieve marvelous feats of instant communication. But having these amazing abilities at our fingertips doesn’t release us from our social responsibilities, whether we march with the ranks of workers or management.

Trosley is editor and general manager of “The Catholic Telegraph.”

Pope Francis: Youth are lost in a 'virtual world', instead of reality

Steve Trosley for May: “Rerum novarum for millennial workers”

A Look Back at Bishop Carl Moeddel’s Ordination 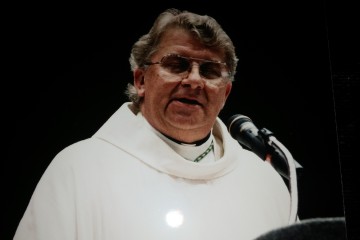