What is the origin of beginning Lent with Ash Wednesday? When did the practice of using ashes start?

Like other practices in the Church, being signed with ashes on the first day of Lent is an ancient custom that has undergone some development. From Biblical times through the Medieval Age, the use of ashes became an outward sign of a person’s desire for repentance, and, ultimately, a reminder of one’s morality.

SACKCLOTH AND ASHES
The use of ashes on Ash Wednesday has pre-Christian roots. In the Old Testament, ashes indicated mourning or repentance. Putting on “sackcloth and ashes” was a typical response to avert impending woes such as a military defeat or famine. As the prophet Daniel exclaimed: “I turned to the Lord God, to seek help, in prayer and petition, with fasting, sackcloth and ashes” (Dan. 9:3).

Jesus also referred to the practice. In preaching repentance, he chastised, “Woe to you, Chorazin! Woe to you, Bethsaida! For if the mighty deeds done in your midst had been done in Tyre and Sidon, they would long ago have repented in sackcloth and ashes” (Matt. 11:21). Jesus, emphasizing the importance of contrition for sin, affirms the ancient practice.

A PERIOD OF PENANCE
In the early Church, the Roman clergy asked those mindful of grave sin to practice penance in the weeks preceding Easter. The practices were public and often severe, including sleeping on the ground, walking barefoot and refraining from bathing. The beginning of the period of penance became ritualized. At the beginning of Lent, a bishop or priest presented the penitent with a simple, often dirty, tunic, sprinkled him with holy water and imposed blessed ashes on the top of his head. These public penances associated with Lent were probably limited to Rome until the 3rd Century, when they spread throughout the Christian West.

The use of the term “Ash Wednesday” to refer to the first day of Lent began in the 11th Century. Before that time, the day was ordinarily called “the beginning of the fast” – signifying the season’s emphasis on fasting and refraining from certain foods. While the particulars of the fast varied, it often included omitting meat, eggs, dairy and other rich foods. For Eastern Christian, Lent commences on “Clean Monday,” so named because of the cleansing of one’s conscience and the confessing of faults, in addition to cleaning the home and pantry to prepare for refraining from particular foods.

TO DUST YOU SHALL RETURN
According to our current custom, when he imposes ashes upon a person, the minister says: “Repent, and believe in the Gospel” (from Mk. 1:15) or “Remember that you are dust, and to dust you shall return” (from Gen. 3:19). The second formulation directly references the ashes placed on one’s forehead, offering a reminder of this life’s limitations. As God formed humanity from dust, each human shall return to the earth at the end of their life.

Receiving ashes to mark Lent’s beginning has spread to many Christian denominations, including Anglicans, Lutherans and Methodists. Those who receive ashes take part in an ancient tradition by which they indicate outwardly their need for penance and their understanding that their lives on earth are preparation for the life to come. Receiving ashes shows a desire for the purity that leads to heaven: “A pure heart create for me, O God, put a steadfast spirit within me. Do not case me away from your presence, nor deprive me of your holy spirit” (Ps. 51:12-13).

Father David Endres is associate professor of Church history and historical theology at Mount St. Mary’s Seminary & School of Theology. This article originally appeared in the February 2021 edition of The Catholic Telegraph Magazine. For your complimentary subscription, click here.

Pope Francis on Ash Wednesday: Lent is a journey from slavery to freedom 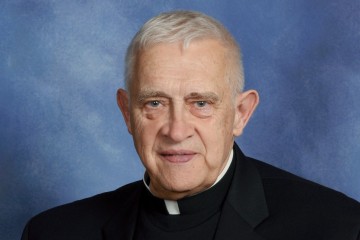