From Pope Benedict XVI’s resignation (see March 2013 cover) to Pope Francis’ election (April 2013 cover) and everything since, The Catholic Telegraph has had the story.

The year 2013 saw the paper’s cover redesigned, and an increased emphasis on the website and social media, even if things didn’t always go according to plan.

“There’s an old line that if you want to make God laugh, make a plan,” Editor-in-Chief Steve Trosley said. “That applies in news without a doubt. We started the year with some grand plans but the pace of the news — a papal election for example, the sheer size of the archdiocese and the requests from our parishes, schools and other groups for coverage preempted most of our designs.”

Still, more than 500 stories appeared in the pages and website of The Catholic Telegraph in 2013.

With that in mind The Catholic Telegraph nominated 10 stories as the year’s best and invited readers select the order via an online survey. 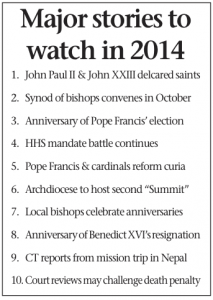 A conclave is always big news. The election of a new pope is a moment of joy for the universal church and the local church. The Catholic Telegraph website had news of Pope Francis’ election less than a minute after he stepped onto the balcony above St. Peter’s Square and the April print edition featured a three-page section with staff and wire reports, as well as a Q&A with an archdiocesan resident who witnessed the historic events from Rome. The humble pope was featured on the cover of the April edition, pictured above. In the online poll, 44.4 percent of all respondents named Pope Francis’ election the top story.

Both in print and online, The Catholic Telegraph had numerous stories related to the end of Benedict XVI’s papacy. Nearly 20 stories were published online and the March print edition featured a two-page spread. A CNS photo of a shadowed Pope Benedict XVI and the words “Sede Vacante” adorned the March cover. Voters in the online survey overwhelmingly voted the resignation as one of the year’s top stories with 33 percent of voters calling it the No. 1 story of the year. More than 45 percent of online voters rated the story No. 2.

A student attempted to take his own life in the middle of a classroom at La Salle. The tragedy galvanized the area into showing their support for the La Salle community via gifts, photos and prayers from all throughout archdiocese. All told, 49 percent of voters rated this the No. 3 story of the year.

Under the direction of Superintendent Jim Rigg, the Archdiocese of Cincinnati consolidated the Greater Catholic League and Girls Greater Cincinnati League into a single entity with three divisions. The divisions are called the GCL South (all boys schools), GCL Co-Educational, and the GGCL with the “C” now meaning Catholic instead of Cincinnati. Each division has it’s own commissioner and logo playing off of the overall league logo. The purpose of the reorganization was to help foster Catholic identity among the league and provide a system that works best for each type of school.

Sister Helen Attenweiler’s educational ministry spanned 56 years and she spent 37 of those teaching at St. William in Price Hill. In May, Sister Helen retired, ending an era of education at that school where the Sisters of Charity formed the faith of countless young people. Sister Helen was honored with an all-school Mass and roughly 30 members of the order, many who once taught at St. William, were on hand.

7. More than 350 at Seton donate hair for cancer patients

The only story on the list to appear exclusively online at www.thecatholictelegraph.com told the tale of 350-plus young women from grade school to high school who donated their hair to Pantene Beautiful Lengths for cancer patients at Seton High School. The story was accompanied by a photo gallery and video of the inspiring speakers, songs and moments from the event. The story was the 11th-most viewed local story of the year at www.thecatholictelegraph.com.

The Catholic Church in the United States has had a long, if at times contentious, relationship with the Girl Scouts. In southwestern Ohio, that relationship was formalized in May when Archbishop Dennis M. Schnurr signed a memorandum of understanding with the Girl Scouts of Western Ohio acknowledging decades of mutual support and cooperation. In remarks at the signing the archbishop said what the Catholic Church and Girls Scouts both try to do is similar, help people discover the particular gifts and talents of young people.

With donations from more than 33,000 Catholics, the Catholic Ministries Appeal raised more than $5 million for the first time in its 35-year history. The CMA funds various ministries, such as food pantries, youth ministry and more, throughout the Archdiocese of Cincinnati.

Summit Country Day teacher Penny Herr was diagnosed with breast cancer in June, and one of her first thoughts was of her students and who would care for them. Herr teaches about the sacraments at Summit and used a special Anointing of the Sick ceremony held for her as a chance to teach students that the sacrament is about healing, not dying. Her inspiring story and the support of the Summit community made this the cover story for the November issue of The Catholic Telegraph.