The newest book by prolific Catholic author Mike Aquilina includes the a story of a pope known for having mistresses and fathering children. The same pope, he writes, may have poisoned cardinals at his leisure and ruled Rome with an iron first.

His point? The One, Holy Catholic and Apostolic church entered that period of that papacy with the deposit of faith in tact, and despite a very worldly, sinful pontiff, it came out the other side with said deposit safe and sound.

The book, Good Pope, Bad Pope: Their lives, Our lessons, tells the story of 12 popes starting with St. Peter and ending with soon-to-be-canonized John Paul II. Along with those two “good popes” it also deals with the aforementioned pope (Alexander VI) and other “bad popes” with the goal of showing how Christ has kept His promise to the church through the ages no matter the failings or virtues of the man occupying the See of Rome. 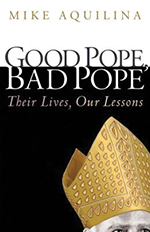 Published by Franciscan Media’s Servant Books in Cincinnati (available online for $14.99), the book runs a brief but satisfying 139 pages. Aqulina has often been praised for his ability to bring intellectual topics to the masses (as he did in The Fathers of the Church: An Introduction to the First Christian Teachers) and he does so again in Good Pope, Bad Pope.

Through Christian history from Liberius to Vigilus and Celestine V to Pius XII, Aquillina takes readers on a journey through the remarkable men who have led the church.

Published in September 2013, the book has a 4.8 of 5 rating on GoodReads.com and a pair of positive reviews on Amazon as well.

One particularly nice part of the book doesn’t actually appear in the print edition. The back cover advertises an afterword by Aquilina on Pope Benedict XVI’s resignation and Pope Francis’ election. Servant Books confirmed that an oversight in printing left the afterword out of the book, but it can be found on the publisher’s website here.

Good Pope, Bad Pope is a book that can embolden the faith of a believing Catholic, and perhaps break down the walls of those who find the papacy to be a stumbling block in their journey to the church. Aquilina doesn’t shy away at all from the fact that many popes were far more sinner than they were saint.

“Yet Francis is still teaching the same doctrine Peter was teaching his little band of followers back when Nero was emperor,” Aquilina writes in the afterword. “An objective, unprejudiced look at history shows that the doctrine of the Church is protected. Even if the pope is a bad man, he never damages the core of Catholic teaching.”

The introduction talks about the Basilica of St. Paul-Outside-the-Walls in Rome where a visitor can see portraits of every pope in a long line from the current Bishop of Rome to the first, St. Peter. Calling it a “jaw-dropping experience,” Aqulina writes that many have been converted to the Catholic faith simply by walking along those portraits. Good Pope, Bad Pope covers just 12 popes, not the total count of 266, but the stories of how the church survived and even thrived under good and bad leaders are themselves something that may inspire conversion.

This book review originally appeared in the January 2014 print edition of The Catholic Telegraph.

Love is at the source of Catholic pro-life position