A few weeks ago, a man came to Father Don West’s office and asked him to hear his confession. His last one was 40 years ago.

“There was something that lingered (from his past) and he wanted to come back and it was very much like a burden was lifted off his shoulders,” said Father West, pastor of St. John the Evangelist Church in West Chester.

Over in Mount Washington, Father Tom King, pastor of Guardian Angels Parish said he has had similar reactions: “I don’t have a specific story other than on occasion there is that sense of release and joy that people express – emotional. ‘I feel so good now. Thank you so much for being here. A burden has been lifted’

“You can tell this has weighed on the person. It might even bring tears at times, but that isn’t often… You can tell the joy, the relief. It has truly been a blessing for them to have experienced reconciliation and have talked to the Lord,” Father King said.

Lent is a penitential season – a time to examine one’s conscience, to talk to our Lord about our spiritual health.

“During Lent, we get a lot more people coming to reconciliation than at any other time of the year. Basically the church focuses on Lent and confession because the old Easter duty is still around. People complete one good confession so they can make their Communion during Easter. It’s kind of antiquated these days, but it is still on the books. And then we have programs like “Keeping the Light on for You,” Father West said.

“It’s a time to come back. It’s a time to make plans to establish themselves in the good graces of God through that sacrament,” Father West said.

The sacrament involves examining ones conscience and one’s spiritual health.

“The first thing one has to do is get the right attitude, especially with reconciliation,” Father West explained. “It is an examination of conscience. What is affecting your relationship with God, yourself and others? There are roadblocks that keep getting in the way, so obviously, the Ten Commandments are a good measuring stick to start with and people also need to refresh themselves on the beatitudes.”

The preparation time needed for reconciliation varies from person to person: How long has a person been away from the sacrament? How busy have they been and has that pushed time for God out of the way? For a person like that, it might require a 15 minute to half hour examination of conscience, Father West said.

Father King emphasized he is grateful to see someone in the confessional who has not visited for a long time. It is not something to fear and Lent is an ideal time to rekindle God’s importance in our lives.

“When someone … says it’s been a long time, I’m not sure where to start. I simply ask, ‘How long has it that been, roughly?’ I’m not hung up on rules. I’m just impressed they’re there and I will help them walk through it,” Father King said.

Parishes provide pamphlets or cards about examining one’s conscience and making an act of contrition, but Father King said the priest acts as a guide to those who need it.

“If you’re coming into the confessional, you have to walk them through the steps. They are obviously seeking God’s mercy and His forgiveness for whatever is on their conscience, so we do have that awesome responsibility and blessing to bring the mercy and unconditional love to the sacrament. That is an awesome gift,” Father King noted.

Father King first asks what a person is sorry for, what’s troubling them, what brings them to confession. “I speak to whatever it is that is troubling them. Is there anything serious such as your marriage? You work at a job; are you faithful to your employer, haven’t taken anything, nothing on your conscience? I throw out a few of those things like that they may not be thinking about.
Father King sees hearing confession as a privilege granted to priests by God.

“I hear confessions at the seminary and I find that a great ministry, an honor. I am very impressed with those young men over there. When I go into the confessional, I remind myself that I am there to be the instrument of God’s mercy. I always throw out a little prayer for the opportunity to be His instrument of mercy and love before I hear confessions. I’m so blessed.”

Welcome to Spring in the Archdiocese of Cincinnati

The prayer of absolution will change for US Catholics in 2023. Here’s how 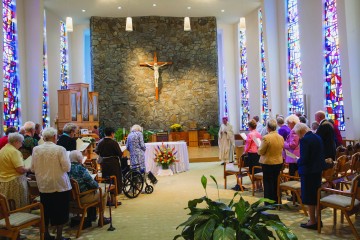