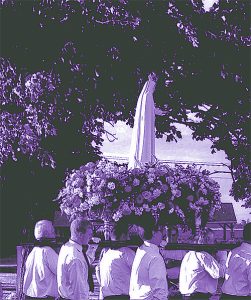 One of six statues blessed by Pope Francis in recognition of the centennial of miracles at Fatima, Portugal, will be displayed at the annual Fatima celebration at the Spiritual Center of Maria Stein in Mercer County Aug. 11.

The six statutes will be touring six countries this year and the United States’ statue will be in Ohio during August. Bishop Joseph R. Binzer will preside at Mass during the Maria Stein celebration starting at 7:30 p.m.

Ginny and Alvin Dues have coordinated the Fatima remembrance for the past 15 years. Alvin Dues serves on the Maria Stein Spiritual Center Board. A crowd of 3,000 to 5,000 people is expected, nearly double what the event usually lures, and organizers are urging visitors to bring lawn chairs.

In addition to the outdoor Mass, the sacrament of reconciliation will be offered, and a candlelight rosary procession will take place on the grounds.

“Pope Francis blessed six of the statues on January 11 and they’re going to six countries. We will have the (United States’) statue at the celebration. We can handle the crowd,” Ginny Dues said. “The statue will be on the island in a pond on our grounds. There’s a long walk to the island. It’s a beautiful setting. We will have all the visiting priests and the crowd gather at the building. There will be a procession with the bishop and the servers and the Knights of Columbus and the Knights of St. John and they’ll go to the small pond with an island in the middle. There’s a wooden walkway to the island.” Dues said.

In May, 100 years ago, in the village of Fatima, three children were divinely chosen to experience the miracle. Pope Francis has followed the Year of Mercy with the Year of Fatima. The miracle began when nine-year-old Lucia Santos and her cousins, Jacinta and Francisco Marto, were herding sheep at the Cova da Iria near the village of Fátima, They reported being visited three times by an apparition of an angel, identified to the children as “The Angel of Peace,” who taught them prayers, to make sacrifices, and to spend time in adoration of the Lord.

On May 13, 1917, the children saw a woman “brighter than the sun, shedding rays of light clearer and stronger than a crystal goblet filled with the most sparkling water and pierced by the burning rays of the sun.” The woman wore a white mantle edged with gold and held a rosary in her hand. She asked them to devote themselves to the Holy Trinity and to pray “the Rosary every day, to bring peace to the world and an end to the war.” While the children had never told anyone about seeing the angel, Jacinta told her family about seeing the brightly lit woman.

The Dues said Maria Stein is sending 11,000 flyers to all area parishes and giving a letter of invitation to the priests to attend.

“Every year, we have had people from everywhere. We get a number from up north. We get buses from Dayton and Cincinnati. This is our 15th year of organizing this. We took this on after they held it at Heritage Park, a public park in Versailles. After 2002, they decided they couldn’t do it there anymore and we felt it was just too good a thing to drop,” said Ginny Dues. She and her husband are members of Holy Trinity Parish in Coldwater.

The Blue Army of Our Lady of Fatima Cincinnati Chapter is sponsoring a bus trip to the spiritual center with pick-ups at St. Thomas More Parish in Amelia and Our Lady of the Holy Spirit Center in Norwood. The cost is $40, which includes bus fare and dinner. For more information, contact John McCabe at 513-543-1170.

Beatitudes are a Christian’s ID card, pope says at audience