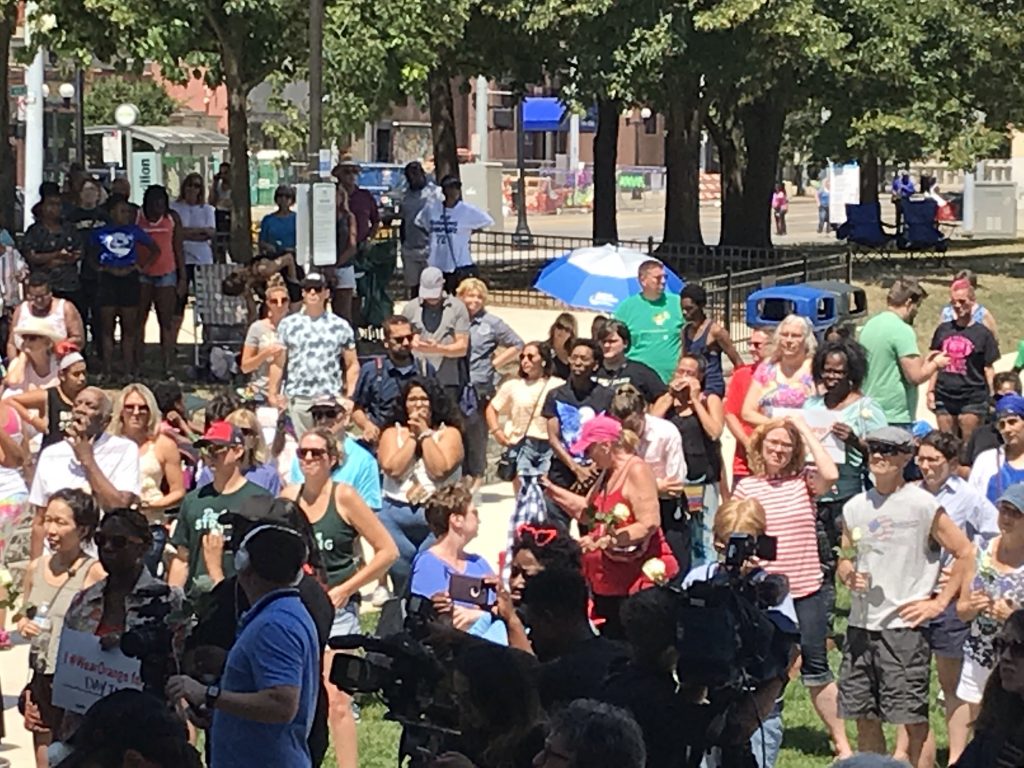 Early on Aug. 4, a gunman killed nine people and wounded 30 other. Responding immediately, police shot and killed the shooter in Dayton’s Oregon Historic District. In the days before the shooting, however, it was a very different scene. Music drifted out of bars, people laughed, and a drum line performed on the street.

“The Oregon District is the heart of the city,” said Shaughn Phillips, director of Evangelization and Young Adult Ministry at Holy Trinity Catholic Church. “I drove through there at 10:30 p.m. the night of the shooting with my windows down. It is literally one of the safest areas in the city of Dayton.”

Holy Trinity stands less than a quarter mile from the site of the shooting. Its white spire is just outside the Oregon District. Phillips lives in St. Anne’s Hill, an adjacent neighborhood.

“I woke up to a couple messages saying, ‘Hey are you OK?’” Phillips said. “My first response was, ‘I need to get down to Holy Trinity…’ From the doorstep of Holy Trinity Church, I was looking down at the Oregon District filled with EMT vehicles and state troopers.”

Phillips said Holy Trinity staff made a point to get the doors open early on Sunday, and the church remained open for prayer until 6 p.m. that night. The morning Masses were well attended, and roughly 50 people stopped in to pray throughout the day.

“None of the victims were parishioners, but they are our neighbors,” he said. “The parish community very much felt that pain and still does.” 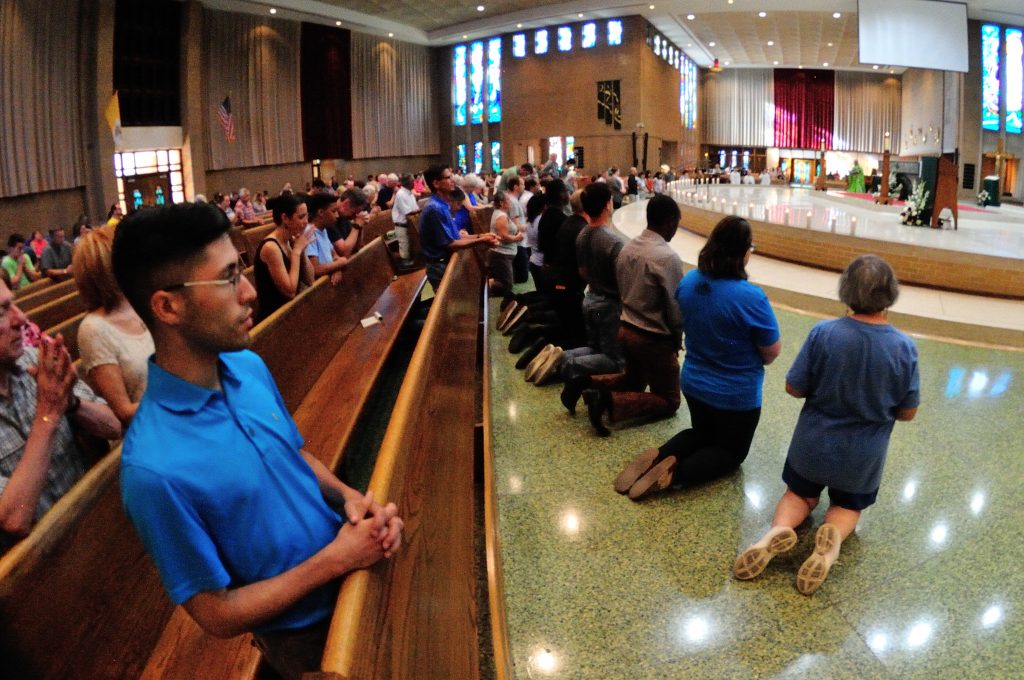 On the Friday before the shooting, St. Albert the Great parishioner Luke Carey and his wife, visited the district. They parked behind Ned Peppers, a bar near the epicenter of the shooting. Carey described the area as “full of life.”

“It took a few hours to comprehend,” Carey said. “I don’t remember when, but I realized that the night before, I had taken a picture of a drum line right next to where the shooting happened.

“We went through a lot of emotions,” Carey added. “The scariest being when you realize, ‘Wait, someone I know could have been there!’ I remembered our realtor lived nearby. My sister’s friend works down there. You start to realize that odds are, you’re going to have a personal connection to this.”

Father Ethan Moore found himself connected to the shooting through his role as the Catholic Chaplain for Wright State University. The shooting took on added significance on campus because Megan Betts, sister and victim of shooter Connor Betts, was a student at Wright State. Logan Turner, another deceased victim, previously attended the school.

Father Moore attended a peace vigil in the Oregon District the night of the shooting. The next day, he helped lead a prayer event at Wright State, and that night, the campus chapel hosted a candlelight vigil. He has also been to the Oregon District multiple times to pray and offer support.

“This has been a topic of conversation constantly for the past week,” Father Moore said. “Everyone is processing this tragedy which has led to a lot of healthy conversations, times of reflection and prayer. My focus has been to stand in the reality of what has taken place, to acknowledge the suffering, loss and pain and yet not to remain there. With the Passion comes the Resurrection.”

Just hours after the shooting, fellow Dayton priest Father Satish Joseph, pastor of Our Lady of the Immaculate Conception, included a prayer service for the victims during Sunday Mass. He has been fielding calls from concerned Catholics, wondering about the role the faithful should play in the national discussion about gun violence. 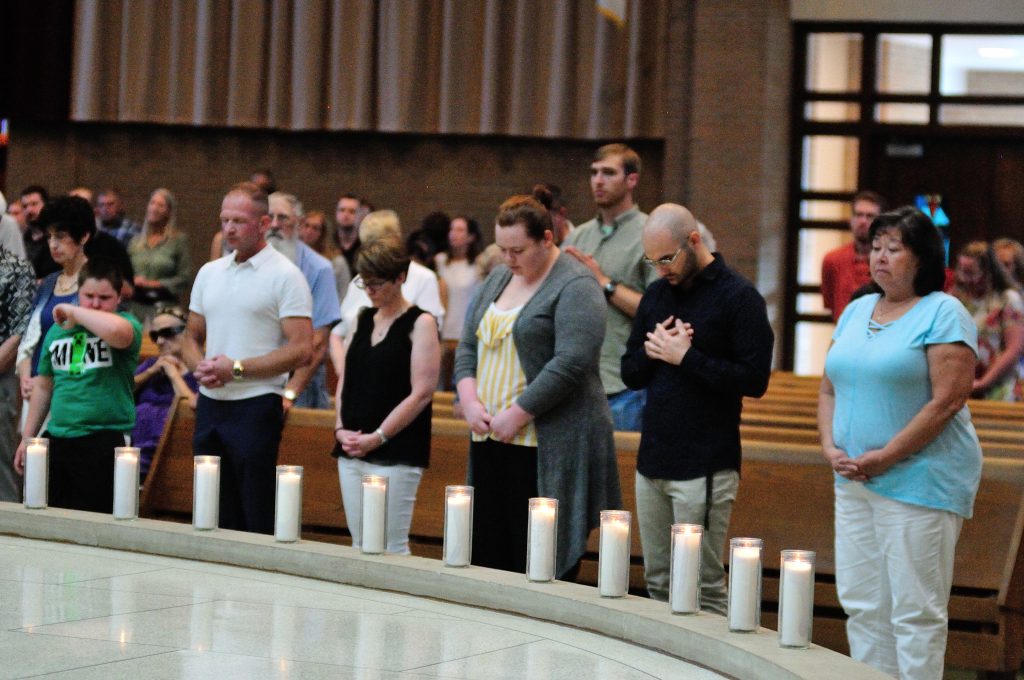 For Father Joseph, the unity of the prayer vigils is contrasted by division over possible solutions to America’s gun violence.

“I’ve never seen the Catholic community as divided as it is now,” he said. “For a lot of Catholics, they are saying enough is enough, but there are other Catholics who take [gun ownership] as an inviolable right.”

Back at Holy Trinity, blocks from the shooting, Phillips had no easy answers for dealing with the violence, but he was inspired by an example from scripture.