Archbishop Pilarczyk enjoyed reminding me he almost didn’t hire me because I, at one time, worked for a cardinal with whom he did not particularly get along. I enjoyed reminding him that it didn’t take long for me to win him over. Over the years I had a great deal of behind-the-scenes insight into his decision making and his administration of the archdiocese. At times, I was privy to things I wished I did not know. I saw him struggle with the abuse crisis – always wanting to believe the best of his priests. It was not about “protecting” anyone with Daniel Pilarczyk. It was an inability to believe, at least early on, that such evil as sexual abuse could have infiltrated the priesthood he so loved.

I believe we had a unique relationship, one of mutual respect and appreciation, but I loved to tease him and treat him much as an “ordinary” boss, which I think was different than how many others treated him. I often stuck my head in his office to tell him a bad joke, or to share a tidbit of Church gossip I’d heard from one of my editor peers in another diocese. He would pretend
to not want to hear it, but my intel was often pretty good, and he came to eventually ask me what I’d heard about certain situations! The archbishop I was privileged to know was not the man you saw in the media; his warmth and interest did not always come across easily to others.

The archbishop was not known to be all that child-friendly. But once he knew a child, he was great with him or her – never condescending. My youngest child was born after I’d been at The Telegraph for a few years. We named him Daniel Edward, after his grandfathers. I immediately told the archbishop when I announced it that I was not trying to win points with him by giving my son his name! But over the years, he always inquired how “Daniel Edward” – full name – was doing, with a twinkle in his eye, and was particularly disappointed when my Daniel did not excel at Latin in high school! I once jokingly told him that I would only allow the Jesuits to have my son as a vocation, and he laughingly ordered me out of his office immediately.

At Confirmation time, a few of my son’s classmates confided they would rather have the auxiliary come, because Archbishop Pilarczyk intimidated them. “Are you kidding?” my Daniel responded. “The archbishop is my homeboy.” When I told the archbishop the story, he laughed, and then asked, “Wait, what’s a homeboy?”

When my children learned one year that the archbishop had never read How the Grinch Stole Christmas, they insisted we gift him with a copy – in Latin.

My late father was a deacon ordained for another diocese, but he died here in Cincinnati after a long illness. My mother wished to have a Mass here before we transferred him to NYC for a funeral and interment. I did not ask the archbishop to preside, since this was not one of “his” deacons and his schedule was always so full. But on that dreary November morning, I was warmed to see him enter into the small chapel and celebrate the Mass.

Those are the more personal stories. As a boss, he was always fair and professional. Archbishop Pilarczyk did not berate employees if they made a mistake, but he wanted to hear it from them, not when it cropped up as a problem later. He supported all of our editorial endeavors, even the slightly unique ones. If I had concerns about a topic, I ran it by him beforehand. Sometimes he would sigh and just look at me, but then wave me off: “Go ahead.” Following one such incident, a fellow bishop from a southern state contacted him to thank him for allowing his paper to tackle a difficult topic, and asked if he could reprint the article and accompanying editorial, since the people in his diocese were struggling with the same debate. Archbishop Pilarczyk was really happy about that; he enjoyed being able to educate others in any possible way.

That was one of the reasons he loved The Catholic Telegraph and was so proud of it. He was a really good writer and of course, a great teacher. His books were bestsellers – simple, pointed, informative. He loved to be able to use any tool possible to share knowledge and his love of the faith. He was proud of the positions that the paper had taken over its long history (slavery, war, economics, capital punishment, etc), and was always the first to congratulate us on an award or recognition.

But my phone would also often ring on a Wednesday morning, shortly after he had received the paper. “This is the archbishop,” he would tell me, as though I hadn’t seen his name come up on my phone. “There is a typo in the fourth paragraph of the story on page eight. I thought you should know.” He was a perfectionist about many things.

After he moved to the Little Sisters of the Poor residence, we would have dinner once a month or so initially, and he enjoyed hearing the national Church news I could share. I had always found him to be a witty and interesting dinner companion, and he was no exception in retirement. But as time passed, and he was less able to get around without assistance, I think it became more of a burden to him to have me visit and have to help him around a public restaurant. He was a proud and private man, and while he accepted his decline with grace, I could see it hurt him to have
others, particularly a laywoman, see him weakening and in need.

In my last few weeks at the archdiocese in 2011, when the archbishop had already retired, our staff was faced with an unthinkable tragedy, the suicide of a longtime Telegraph employee. As soon as he heard the news, Archbishop Pilarczyk came down to my office, pulled up a chair and cried with me. I will never forget that. Most coworkers in that situation do not know what to say, so
they avoid it. He did not, nor did he try to console. He just shared the grief and shouldered some of it. I know many people will not be able to envision that, but it’s one of just many reasons you dare not say a bad word about Archbishop Pilarczyk in my presence. I will not allow it. He was a good and holy man.

Did he make mistakes? Show me a human who has not. But he was one of the most moral and honestly good people I’ve ever met. Truly, the last of the Jadot archbishops will be greatly missed in the national and world Church. And I feel very fortunate to have had the time I had with him. 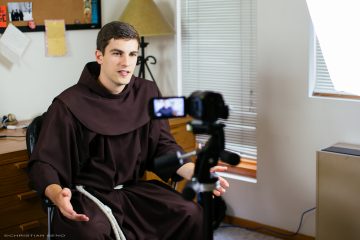