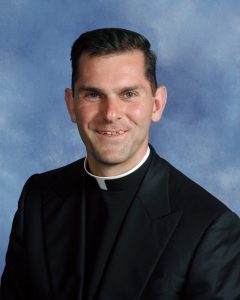 Reverend James R. Brooks died on April 22, 2017. He was born on October 11, 1977 in Dayton, Ohio. He studied Classical Humanities at the Legion of Christ College of Humanities and Novitiate in Cheshire, Connecticut. He received a Licentiate Degree in Philosophy and Moral Theology from the Ateneo Pontificio Regina Apostolorum in Rome, Italy. He was ordained on December 12, 2009 by Monsignor Brian Farrell at St. Paul’s Basilica in Rome, Italy for the Legionaries of Christ.

Following is an excerpt from some words he expressed to the parishioners at St. Margaret of York Parish in February 2017. “We are a people of hope, so we hope. We are a people of prayer, so we pray. I truly believe the words of St. Paul, ‘For me to live is Christ, and to die is gain,’ because, for me to live is to be with you, to do the thing that I love most…to be your pastor. But for me to die is to be with the Father forever.”