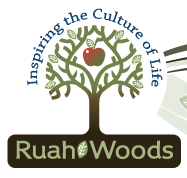 The dedication of the New Evangelization Center at Ruah Woods in 2014 was a milestone for the organization and it is continuing to expand its ministry geared toward restoring the family and renewing the culture by educating and training others to understand, embrace and share the message of St. John Paul II’s Theology of the Body.

Theology of the Body refers to a series of 129 lectures given by the late pontiff during his Wednesday audiences in Rome between September 1979 and November 1984. These addresses were later compiled and published as a single work titled “The Theology of the Body According to John Paul II.” It covers such topics as the bodily dimension of the human person, the nature of human sexuality, the human need for communion, and the nature of marriage.

Engaged couples come to the center to learn about God’s plan for a joy filled marriage through Ruah Woods’ marriage preparation course.

Teens are engaged in learning about Theology of the Body through Ruah Woods’ classes, retreats, special events and a formation program called Kenosis, which equips them to share this teaching with peers.

The organization’s client base has grown steadily since opening its doors in 2011, hence the need to add to the staff.  “With what’s going on the world, all the bullying cases and all the pressure on families and children, they’re facing issues we never would have imagined,” said Dick Hammersmith, director of marketing and development for Ruah Woods.

“I’m very excited to be part of the RWPS team, serving the residents of the Greater Cincinnati area,” Montagna said. “The first several months of working with new patients have been very rewarding. I look forward to reaching out to schools and other community groups to learn what their particular needs may be and how we at RWPS can help.”

Montagna added that she is particularly looking forward to working with families who might be experiencing difficulty at home or in a school setting. “In my experience treating young children and adolescents in school, clinic or hospital settings, it is often the case that previous attempts to fix the problem have failed to work, often to everyone’s frustration,” she said. “It could be a behavioral, social, emotional, or learning problem that leads to the referral. It is very gratifiying when we accurately assess the difficulty and recommend interventions that result in positive outcomes for kids and their families.”

Montagna and Sodergen are also offering a seven part monthly lecture series titled “Love is Our Mission,” to prepare for the World Meeting of Families. The series began in February and will continue on Friday evenings through Aug. 27. Each talk will run from 7:30-9 p.m., and will be held at 6648 Wesselman Road, Green Township, and will also be live streamed over the Internet. Topics include, “How We Learn to Love,” “Understanding, Preventing and Healing from Divorce,” and “Honoring Your Children: Raising Godly Children in the 21st Century.” The cost is $10 per person, per talk. For more information or to register, visit www.ruahwoods.org, or call 513-407-8672.

Other expansion plans include adding an intern program to assist with RWPS and continuing to work with other dioceses throughout the country to establish centers and services similar to Ruah Woods. The organization is also working with the archdiocesan Catholic Schools Office to develop a pilot program with administrators and teachers from half or dozen or so local schools to further deepen and clarify their faith.

In March, former U.S Senator Rick Santorum, who is a devout Catholic, visited and toured Ruah Woods, expressing his praise for the organization’s ministry. During his visit, attended by Ruah Woods supporters, board members and friends, a panel discussion highlighted Ruah Wood’s growth and contributions over the years. The panel included, among others: Tony Maas, Ruah Woods founder, Executive Director Leslie Kuhlman, and Father Rob Muhlenkamp, parochial vicar at St. Jude Parish. Father Muhlenkamp described Ruah Woods as a “gift to the archdiocese,” saying, “It’s of great benefit to our parishes, providing the building blocks for strong marriages and families.”

Courtney Brown, Theology of the Body education director at Ruah Woods, said, “We enable high school students to enter into an understanding what love is, and teach them about their own dignity and worth, that they are gifts who are meant to be loved. We help them build of cultures of love in their own school communities.”

This feature originally appeared in the June 2015 print edition of The Catholic Telegraph.

The Wounds of Sin