Joe Nagle, principal of Sacred Heart of Jesus School in Fairfield, believes a Catholic education should be a complete education. That’s why he’s a big supporter of the school’s annual capstone project.

The project, undertaken by eighth graders in their third trimester of school, is a major research paper complete with a trifold presentation board. The topics come from Catholic social teaching, allowing the students to use their research, language arts and religion skills to address real word problems from a moral perspective. In particular students choose from the seven themes of social justice: Life/Dignity of the Human Person, Call to Family/Community/Participation, Rights and Responsibilities, Option for the Poor and Vulnerable, Dignity of Work/Rights of Workers, Solidarity and finally Care of God’s Creation.

Student presented their displays on May 20 this year before their annual award ceremony. During their presentation, students fielded questions from teachers, parents or peers who ask about their displays. The list of topics presented was diverse.

Under Life/Dignity of the Human Person, student Reily Mescher reported on modern concentration camps. Under Option for the Poor and Vulnerable students Courtney Boomer and Mira Maroun each researched mental illness. In the category of Care for God’s Creation, students approached everything from endangered species to animal rights. Still others tackled difficult topics such as racism, child labor, school violence and more.

“Graduating students leave us having harnessed what they have learned in religion and research to make their mission real,” Nagle said. “If they’re going to a Catholic high school, which most of them do, when the social justice themes are brought up in class, they’re suddenly the classroom experts because they’ve done this research.

“You have these skills, let’s write about something that might be important,” he added. “It’s a very Catholic sort of capstone.”
The capstone project at Sacred Heart was developed in 2014 by former English teacher Emily Owen, now on staff at Ursuline Academy, and current Religion teacher Debbie Otero. It is a cross disciplinary approach that makes students take a serious look Catholic social teaching. Current Language Arts teacher Rob Schaich helps guide the students in choosing topics and developing their research. Student work on the project in class and individually at home.

Nagle recalls a student from a few years ago who wrote about Eleanor Roosevelt and her work championing the Universal Declaration of Human Rights. He remembered the students that year had covered the era following World War II in social studies, linking a third subject with the capstone project. The student’s passion and dedication for the project were evident.

“It was a link between research skills, religion and social studies,” he said. “I thought that was very cool that this kid put those three things together. If we can cause the kids to do some creative thinking and link things together like that, it’s pretty cool.” 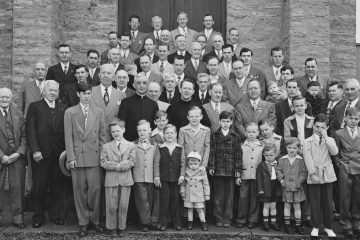