September 29, 2022 Greg Hartman
Home»Commentary»Seize the Moment: Going for It in Prayer, Like a Prophet Would
Commentary/Home Page

I work with some amazing people. I’m talking one-of-a-kind people. Passionate. On-fire-for-the-Lord people. Honest-to-God disciples on mission. It’s rare, awesome and a complete honor. But it has also been very humbling and convicting, and it has made me realize that I have a lot of learning and growing to do.

One thing I’m trying to get better at is praying over people and trusting the messages I receive in prayer. Sometimes I think I’m not cut out for it. Isn’t that the sort of thing that prophets do? I don’t typically think of myself in those terms. But, as a baptized Catholic, I know it’s what I’m called to do. I’m trying to own my identity as a Catholic and beloved son of the Father.

When I was a baby, the priest anointed the crown of my head during my baptism and initiated me into the mighty, three-fold office of Christ. I was made a priest, prophet and king, just like Jesus. In practical terms, this means praying with the people in my life and sharing with them anything I receive from God. I was built for this. You were, too. We all were when we were baptized!

So, I’m trying to seize the moment and heed the impulse to pray with people and share a truth with them. I think I recently had a breakthrough.

A few weeks ago, I joined a team of colleagues and local parishioners for a four-day training on evangelization and missionary discipleship. One of the evenings was reserved for Eucharistic adoration. When we arrived, the Eucharist was already exposed and praise-and-worship music filled the air. I knelt down and, before long, I heard a young woman I know. She was kneeling somewhere behind me and she was sniffling, like she was crying but trying to hold it in.

As I listened to her, a thought came to me: “God loves her so much.” When I first heard this, my response was, “Well, no, duh.” Of course God loves her. The thought is not rocket science to a Christian. In fact, it’s almost absurd in its simplicity. Then I panicked. Do I tell her? Surely she knows already, right? Plus, we know each other, but we’ve never shared anything deeply personal like this before. Will she think I’m a creeper? I wasn’t sure what to do.

But the more I knelt there, the more I became overwhelmed with this thought: “God loves her so much.” Finally, when I couldn’t resist anymore, I decided, “I’m going for it; I’m telling her.” So I went over to her, knelt beside her, put an arm around her and said it exactly like I heard it: “God loves you so much.”

When she heard me say that, she leaned into me and cried for a time. I thought to myself, “OK, she doesn’t think I’m a creeper. So far, so good.” Once she began to compose herself, I asked her, “What’s on your heart?” and she shared with me what she was struggling with that night.

What a gift she was, so open, honest, and precious, just laying it all out before the Lord and me. We talked for a little while. Sometimes the only thing I knew to say was what I had already told her. But, it seemed to help, and when it felt natural to do so, I returned to my seat.

That moment has really stuck with me. I’m so thankful that God wants to use me. I’m so glad I could make this young woman’s heart feel better. I’m also wondering: How often in the past has God tried to use me and I wasn’t listening to Him, I was afraid, or I didn’t trust the words He gave me? How else might God use me to bring prayer, healing and maybe even a prophetic word to someone who needs it? 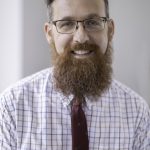 Nicholas Hardesty creates content and leads workshops for Contagiously Catholic, an archdiocesan initiative that seeks to empower our parishes and schools to equip the laity for evangelization. [email protected]