This is especially true in California, where St. Junipero, a Spanish-born Franciscan friar, carried out his mission work in the 18th century. Six of the state’s 12 dioceses are still considered mission dioceses “because of the high number of people who are economically poor,” Father Wall said. They’re part of the 94 out of 196 Catholic dioceses nationwide that are classified as mission dioceses.

Since its founding in 1905, Chicago-based Catholic Extension has been supporting the work and ministries of these dioceses, “where the faith is thriving but the resources are scarce.”

Father Wall, a Chicago archdiocesan priest, said he attended the “quite stunning” outdoor Serra canonization Mass at the Basilica of the National Shrine of the Immaculate Conception in Washington. Pope Francis celebrated the Mass from an altar constructed on the steps of the national shrine’s east portico. Massgoers gathered on the lawn in front on the adjacent campus of The Catholic University of America.

The priest said he was especially struck when the pope “reached back into history” by quoting “St. Junipero’s great line: ‘Go forward, never go back.’ You could tell he was very much moved by it as well.”

St. Junipero is the first saint to be canonized in the United States rather than at the Vatican.

A special object that graced the altar that day was the new saint’s missionary cross — called the Cross of Caravaca after the town in Spain.

On Sept. 2 at the Vatican, Chicago Archbishop Blase J. Cupich, chancellor of the Catholic Extension board of governors, presented the double-barred cross to Pope Francis for a blessing.

The cross was found when St. Junipero’s remains were exhumed in 1943 and it has been exhibited at the San Carlos Borromeo de Carmelo Mission in Carmel, California, in the Diocese of Monterey. Since the Serra Mass, it has been returned to the mission.

A reliquary containing relics of St. Junipero Serra also was on the altar for the canonization Mass. Two California liturgical artists were commissioned to create the reliquary, Marirose Jelicich of Sacramento and Father Ronald G. Schmit, pastor of St. Anne Church in Byron. They took their inspiration from St. Junipero’s mission cross, which itself contained the relics of Blessed Raymond Llull (1235-1315), a native of the friar’s beloved Mallorca to whom he had a special devotion.

While Father Wall was at the Vatican in early September, the pope got to see for the first time “Flat Francis” — a cartoon drawing of the pope that Catholic Extension created to help to build excitement and support for the U.S. papal trip ahead of its start.

The drawing shows the pope holding the Catholic Extension logo and #FlatFrancis is printed at the bottom of his cassock. People were encouraged to download the cartoon at www.flatfrancis.org, print it and take selfies as they held up a Flat Francis.

The project took some inspiration from “The Flat Stanley Project,” which centers on a paper cutout of Flat Stanley, a cartoon drawing based on books of the same name, being photographed with people in numerous locations.

“He broke out in the biggest belly laugh you’ve ever seen,” said Father Wall about the pope’s reaction to the cartoon.

Even that had a serious purpose, though. “The image he’s offering is that we are all missionary disciples. We should reach out to the world in so many ways,” he added.

Keeping it cool with a Pope Francis 'popesicle' 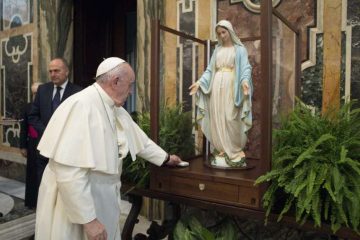