Serve, care for each other, pope tells families at closing Mass

PHILADELPHIA — Pope Francis urged the hundreds of thousands of people gathered for the closing Mass of the World Meeting of Families to serve and care for each other as freely as God loves the human family.

The pope called upon the faithful to embrace signs that the Holy Spirit can work through everyone. He referred to the readings in the multilingual Mass — from the Book of Numbers and the Gospel of Mark — in which members of the faith community questioned the work of those not part of their group and for prophesying in the name of God.

“To raise doubts about the working of the Spirit, to give the impression that it cannot take place in those who are not ‘part of our group,’ who are not ‘like us,’ is a dangerous temptation,” the pope said. “Not only does it block conversion to the faith; it is a perversion of faith. Faith opens a window to the presence and working of the Spirit. It shows us that, like happiness, holiness is always tied to little gestures.”

Illustrating his point before the Mass, Pope Francis engaged in “little gestures” himself along the papal parade route to the Mass, kissing and blessing many babies brought to him from the sidewalk throngs by Secret Service agents, who themselves managed to cracked smiles after days of maintaining a stern demeanor as they guarded the pontiff.

Pope Francis recalled that Jesus encountered “hostility from people who did not accept what he said and did,” saying they thought it intolerable that Christ was open to honest and sincere faith from men and women who were not part of God’s chosen people.

“The disciples, for their part, acted in good faith. But the temptation to be scandalized by the freedom of God, who sends rain on the righteous and the unrighteous alike, bypassing bureaucracy, officialdom and inner circles, threatens the authenticity of faith. Hence it must be vigorously rejected,” he said.

“Once we realize this, we can understand why Jesus’ words about causing ‘scandal’ are so harsh. For Jesus, the truly ‘intolerable’ scandal consists in everything that breaks down and destroys our trust in the working of the Spirit,” he continued.

Pope Francis held up the family as vital to building the church for the future. He said love must be freely shared for faith to grow.

“That is why our families, our homes, are true domestic churches. They are the right place for faith to become life, and life to become faith,” he said.

“Little gestures” of love exist daily in the lives of family and serve to carry on God’s love as well, Pope Francis explained.

“These little gestures are those we learn at home, in the family. They get lost amid all the other things we do, yet they do make each day different. They are the quiet things done by mothers and grandmothers, by fathers and grandfathers, by children. They are little signs of tenderness, affection and compassion,” he said.

“Like the warm supper we look forward to at night, the early lunch awaiting someone who gets up early to go to work. Homely gestures. Like a blessing before we go to bed, or a hug after we return from a hard day’s work. Love is shown by little things, by attention to small daily signs which make us feel at home.”

Pope Francis asked the worshipers to consider how they share God’s love with people in their families and in the world around them.

“What kind of world do we want to leave to our children?” he asked, referencing a line in his encyclical “Laudato Si’, On Care for Our Common Home.”

“Our common house can no longer tolerate sterile divisions,” he continued. “The urgent challenge of protecting our home includes the effort to bring the entire human family together in the pursuit of a sustainable and integral development, for we know that things can change.”

The pope asked the congregation to consider how they treat each other in their own home. “Do we shout or do we speak to each other with love and tenderness? That’s a good way of measuring our love.”

Calling the church to renew faith in the word of God, the pope said people can live prophetic lives as a “kind of miracle in today’s world.”

“Would that we could all be prophets. Would that all of us could be open to miracles of love for the sake of all the families of the world, and thus overcome the scandal of a narrow, petty love, closed in on itself, impatient of others,” he said.

As the Mass concluded, Archbishop Vincenzo Paglia, president of the Pontifical Council for the Family, who also was lead Vatican organizer of the World Meeting of Families, announced the next meeting will take place in Dublin, in 2018.

Six families, representing five continents, received copies of the Gospel of Luke. Families from Syria, Vietnam, France, Australia, Congo and Cuba were chosen for their church involvement and faith life. The Vatican also planned to distribute 100,000 copies of Luke’s Gospel in the families’ home countries.

Serve, care for each other, pope tells families at closing Mass

We are grateful for all who have served our nation on this Veteran’s Day. 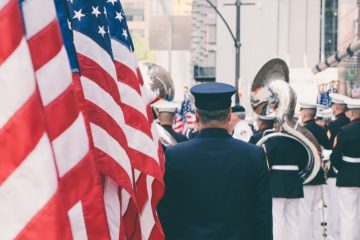