Holy, heroic, brave and bold: all words that describe the Sister of Charity of Cincinnati who could become Cincinnati’s first saint. Servant of God Sister Blandina Segale spent most of her life in Cincinnati but the Archdiocese of Santa Fe claims her as its own, too, and took the action that led to the opening of her cause for sainthood in 2014. Her adventures are legendary and the subject of comic books and television shows. Now, her journey along the Santa Fe Trail may be part of her path to sainthood.

Her story began in Italy in 1850 when Rosa Maria Segale was born. At age four, she emigrated to the U.S. with her family and at age 16, entered the convent. After teaching in Dayton and Steubenville, she was given orders to join other sisters in on the western frontier.

“She was in her twenties,” said Veronica Buchanan, Archivist for the Sisters of Charity of Cincinnati. “She traveled west alone, which was very rare at the time.”

At 22, she landed in Trinidad, part of the Colorado Territory and eventually moved to Santa Fe and Albuquerque. Formidable and fearless, she never faced a challenge she couldn’t meet.

Sister Blandina oversaw the building of schools, hospitals and a convent. She stood up to human traffickers and stood up for the oppressed. She negotiated with tradesmen and lawmakers. When her school needed a roof, she climbed up there and started the work herself and she helped a man with plastering when he had no crew. She tended to the sick and buried the dead. She convinced the legislature to provide funding for a hospital that cared for indigent patients. She taught school, cared for orphans and visited prisoners in jail.

She encountered cowboys, indigenous people and outlaws, including the infamous Billy the Kid. Her adventures out west are detailed in a series of letters sent to Sister Justina, her biological sister who was also a Sister of Charity. They were later published in a book called, At the End of the Santa Fe Trail. Sister Blandina met Billy the Kid when she treated a wounded member of his gang. No doctors would care for the man. Grateful, the outlaw made her a promise. Sister Blandina writes that Billy told her, “any time my pals and I can serve you, you will find us ready.”

“Heroic Virtue is what gets you veneration,” said Allen Sanchez, the petitioner for her Cause. “You have to prove the person had heroic virtue. So these very important stories from her journal had to be researched.”

A private detective in New Mexico and two Sisters in Cincinnati researched and confirmed Blandina’s good works. The documents were sent to Rome where a Historical Committee and a Theological Committee will examine them and make a recommendation to Pope Francis if she should be given the title, Venerable.

As of today, there are 29 miracles reported due to Sister Blandina’s intercession. Pamela Kent is convinced she’s one of them. She gave her testimony to a team working for Sister Blandina’s canonization. In 2014, Kent got sick and, after being told she had asthma, then bronchitis, and finally pulmonary fibrosis, doctors said she had two years to live. Two Sisters of Charity she knew witnessed her rapid decline.

“Unbeknownst to me, they started to pray to Sister Blandina for my recovery,” said Kent.

Eventually, she learned about the prayers, and she began a devotion to Sister Blandina, too. Kent got worse before she got better. Then, one day, her illness disappeared as quickly as it came.

“The sisters prayed for me for two years to Sister Blandina, and by April of 2016, I met with my pulmonologist, and he said, ‘I’ve never seen this before,’” said Kent. “’There’s absolutely no explanation for this. None. He said, ‘You don’t have any scarring on your lungs at all. They’re clear.’”

When she returned to Cincinnati from the frontier, Sister Blandina taught at St. Gabriel in Glendale and St. Boniface in Northside. Then she was given a new mission. She and Sister Justina were asked to help the influx of Italian immigrants to the city. In 1897, they founded the Santa Maria Institute. It helped the immigrants meet housing and education needs, helped them find jobs and helped bridge the language barrier. Today, it’s called Santa Maria Community Services and ministers largely to Hispanic immigrants. Sister Blandina helped found San Antonio parish in 1922 as a place for Italian immigrants to attend Mass.

Sister Blandina died in 1941 at the age of 91, but not before she returned to Italy one more time. She went to petition Pope Pius to plead the Cause of St. Elizabeth Ann Seton, the foundress of the Sisters of Charity. Now, they wait for her to move one step closer to sainthood. 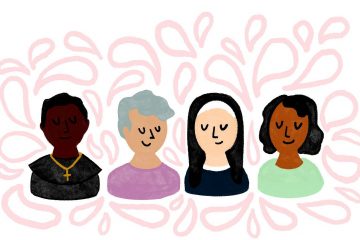