Before Sister Eileen Connelly became an army veteran, or a reporter and newspaper editor, or a hospice volunteer or an Ursuline, she adopted a cat. That cat, Katie, helped shape another ministry with which Sister Eileen is very involved – rescuing abandoned and stray felines.

“I don’t go looking for cats to help. They seem to find me,” she said. “There was one that ran across the street and jumped in my car when I was out running errands, or another who emerged from behind a trash can one bitterly cold day literally caked in ice.”

She said when a cat wanders up to her, it’s usually a cat in need.

“Every time a cat would cross my path, I would always worry, how am I supposed to help this cat? So I would pray about it. I would say “if you’re going to send me a cat to help, help me find a way to do that.”

And, she said, God always provides.

Sister Eileen’s dedication to felines grew after adopting Katie the cat while on active duty in Belgium. When she returned home, Katie came with her. Willie soon joined the family, followed by Gracie after he passed away.

“Gracie got her name because around the time I adopted her I was teaching fourth grade PSR and the definition of grace in the manual for the children was ‘the gift of God’s love for us.’ And I just thought that was beautiful.”

Today, Peter and Claire are also part of the Connelly crew, both named for saints. Sister Eileen adopted Louie, a neighborhood stray named after her late father, in 2012. But, they aren’t the only cats under her care. Nine years ago, she heard kittens were being born and left to die in a Cincinnati neighborhood and she wanted to help the residents who were concerned about the animals. She took food to the kittens and did what she could for them, but it wasn’t until she became acquainted with Ohio Alleycat Resource (OAR) that her rescue efforts became more organized and focused. Sister Eileen learned how to properly trap the cats. Then she took them to OAR to be spayed and neutered before releasing them back in their surroundings. To date, about 50 cats have been fixed just on that one street. She found homes for many of them. Every day since, either on her way to work at The Catholic Telegraph or on her lunch hour, Sister Eileen visits that neighborhood to feed the seven cats in her colony.

“Initially when I got involved in this, I seriously thought I was in over my head,” she said. “I didn’t want to be involved. I love animals, but it was a lot of stress, it was a lot of time. I felt really conflicted about whether it was something I should be doing when there are so many other needs out there.”

“We call Eileen St. Eileen. We gave her a little bit of a promotion,” said OAR volunteer Drue Johnston. She calls Sister Eileen skilled and determined when trapping the cats.
The ministry isn’t just about connecting with a cat. There are human bonds, too. like getting to know the wife of a Baptist minister who lived near her cat colony, watching the kids in that neighborhood grow up over the years., or helping a senior citizen have his or beloved pet fixed. “There is very much a human element involved in this, too,” Sister Eileen explained. “I’ve had the opportunity to connect with some really wonderful people who want to help the cats in their neighborhoods or do what is best for their pets. OAR helps cats and communities. That’s one of many reasons I love volunteering there.”

She’s gotten to know all the volunteers who help at OAR where she is also the adoption coordinator and serves on the board of directors. When people find out she’s a sister, they are sometimes surprised, but the response is always positive. “I love our volunteers,” Sister Eileen said. “They are among the most compassionate people I know, and we care about each other as much as we do the cats. I’m always touched and humbled when volunteers ask for prayers.
The adoption process can also present an opportunity to evangelize, like the time she helped a young couple return to the church or kept in contact with an adopter who requested prayers when his grandmother was in Hospice.

In addition to her four cats at home, Sister Eileen fosters cats and kittens before they are put up for adoption.

“She takes kittens that come from very difficult circumstances and totally socializes them and teaches them to trust humans,” says Mary Casey-Sturk, development director at OAR. “The relationship she builds with them transfers over to them when they get adopted. It’s priceless.”
Johnston said she wishes there were more people like her.

And for those who may argue, she should be helping people instead of animals, Sister Eileen said, “I believe that you can’t categorize compassion. We’re called to help all God’s creatures. I don’t have hungry people showing up at my door. If I did, I would help them. But I do have hungry, abandoned or injured cats that find me, so I help.”
OAR is a no kill shelter. It doesn’t accept cats from the public. It rescues the ones that would be put down at other shelters because of lack of space. Sister Eileen didn’t figure compassion for cats would be part of her life’s work, but it is another mission to which she is devoted.

“So much in my life hasn’t turned out as I planned,” she said. “I never thought I would be as involved as I am with helping cats, but you do what God asks you to do, and do it with faith, joy, gratitude and compassion.

As his film debuts, Wahlberg finds time to praise priesthood in video 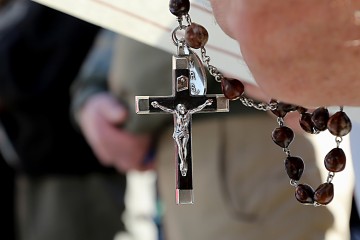