A new PG-13 version of Mark Wahlberg’s latest Catholic film, “Father Stu,” is coming back to the big screen Dec. 9 with an aim at widening the audience to include more families with children, according to the movie’s director and screenwriter, Rosalind Ross.

Like the original cut — which was released in April and included some eyebrow-raising profanity and other sexual on-camera moments — “Father Stu: Reborn,” chronicles the life of Father “Stu” Stewart Long, a rough-around-the-edges Montana boxer turned Catholic priest in a riveting story of loss, suffering, and redemption.

However, the new cut drops more than 100 swears and all religious profanity, Ross told CNA on Friday.

The film also tones down a sexually provocative scene, she said. She added that there are still some swears in the film, but they are “in the realm of, ‘Damn.’” Any “F words” and certain lines where God’s name is taken in vain were cut, she said.

The profanity and frisky on-screen action were an issue for some fans of the original film.

“The constant refrain from the audience was, ‘I love this movie. I wish I could bring my kids to see it,’” Ross said.

“We wanted to remove that obstacle and open the experience up to the whole family. We really just listened to the audience and were blessed to have a chance to react to that,” she said.

“I think it’ll open a discussion about God and redemption and suffering and purpose and things that most of us probably don’t talk about enough with our kids,” Ross, who considers herself “spiritual,” told CNA. “And I think it will really speak to a younger audience, people who are trying to find their faith and their purpose in life.”

Played by Mark Wahlberg, Father “Stu” Stuart Long died at the age of 50 in 2014 from a rare muscular condition. He was ordained a priest in the Diocese of Helena in 2007. A late vocation, Long had pursued careers in acting, boxing, teaching, and museum management before entering the priesthood.

Before finding his faith, Long almost died in a severe motorcycle accident that hospitalized him. It was in the hospital that he had an experience that led him to pursue the Catholic faith and enter RCIA. Shortly after he was baptized, he felt the call to the priesthood. You can watch the new trailer below.

Wahlberg, who is also one of the film’s producers, told EWTN’s Raymond Arroyo in an interview that aired in February that one of the goals of the movie is to inspire those who are suffering to persevere.

He told Arroyo that he financed the movie himself and that he included the profanity used by Long because he wanted to be “brutally honest.”

“And you know … people swear. We wanted to be brutally honest. We want to make sure that this movie is not exclusive to Catholics and devout people. This is inclusive to everybody who needs people. You remember what God’s mission was, right? He didn’t come to save the righteous,” Wahlberg said. You can watch the interview here.

Ross said that it’s “probably undeniable” that one of Wahlberg’s motivations for the film was to bring people to God. But for her, evangelization wasn’t the “chief motivation,” she said.

“I can’t say that was the sort of chief motivation for me going into it but if that’s an outcome, then I’m really happy about that,” she said.

Ross said she would take on another faith-based film in the future given the positive reaction to the film.

“I can’t tell you how wonderful it felt and how rewarding it was to hear people’s reactions to this film and how it moved them and how it reaffirmed their faith or brought them back to their faith,” she said.

The first cut of the movie was released in April and grossed $21,591,034 worldwide, according to boxofficemojo.com. After its Netflix release, the original cut held the No. 1 spot on the online television and movie platform, according to thecollision.org.

“I hope that other filmmakers will be encouraged to make more films for that audience as well. I think there’s a real hunger for it. I think we’re in a bit of a spiritual desert here in the modern world, so you got to feed the people,” she said. 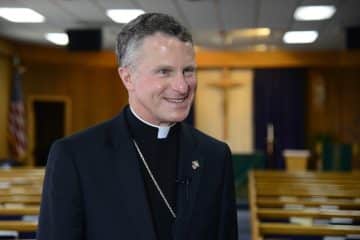