Pope Francis addressed the fight for women’s equality during a press conference aboard the papal plane to Rome on Sunday.

Speaking in-flight from Bahrain to Italy Nov. 6, the pope said women are a gift to society — but the struggle for their fundamental rights is doomed to continue as long as there are places in the world where women are not valued as equals.

Returning from the Muslim-majority country of Bahrain, Pope Francis was asked if he supports the efforts of women and young people in Iran to fight for more freedom.

“We have to tell the truth,” the pope said, “the fight for women’s rights is an ongoing fight because in some places women have equality with men but in other places they do not.”

He condemned as “criminal” the practice of female genital mutilation, asking, “how come, in the world today, we cannot stop the tragedy of infibulation to young girls?”

“According to two comments I heard, women are disposable material (that’s bad, huh) or a protected species,” the pope said. “But equality between men and women is still not universally found and there are these incidents where women are second class or less.”

He said: “We have to keep fighting for that, because women are a gift.”

Anti-government protests have taken place across Iran since the death of Mahsa Amini, a 22-year-old Kurdish Iranian woman who was detained Sept. 13 by morality police for allegedly violating the regime’s strict dress code that requires women to cover their hair with a hijab or headscarf. According to Iran Human Rights, based in Norway, at least 304 people have been killed in police crackdowns on the demonstrations, including 41 children.

Pope Francis said when God created man and woman, he did not create woman to be the man’s pet “dog.” He pointed out that while St. Paul’s words about the relationship between men and women can seem today to be “old-fashioned,” at the time it was revolutionary.

“Man is to take care of women as his own flesh, and all women’s rights come from this equality,” he said.

“A society that is unable to put women in her [rightful] place does not move forward.”

He praised the unique way women approach problem-solving and said it is “not inferior, it is complementary.” He also encouraged men and women to work together for the common good.

He pointed to the appointment of a woman as vice governor of the Vatican City State and the inclusion of women on the Council for the Economy, which he called “a revolution, because women know how to find the right way, they know how to move forward.”

Pope Francis also mentioned, by name, Italian-American economist Mariana Mazzuccato, who he recently appointed a member of the Pontifical Academy for Life.

The appointment drew criticism because Mazzuccato has been an outspoken advocate of abortion rights on Twitter.

“And now, I put on the family council Mazzuccato, who is a great economist from the United States, to give a little more humanity to this,” he said.

Pope Francis spoke about women, abuse in the Church, the crisis in Lebanon, Muslim-Christian relations, and the war in Ukraine during the flight returning from a four-day visit to the Kingdom of Bahrain in the Persian Gulf.

Pope Francis was the first pope to ever visit Bahrain, an overwhelmingly Muslim nation.

His Nov. 3-6 trip included encounters with government officials, Muslim leaders, and the small Catholic community, including a Mass with around 30,000 people in Bahrain’s national soccer stadium.

The small Christian minority in Bahrain is mostly made up of immigrants, especially from India and the Philippines.

More than 70% of the total population — 1.5 million — is Muslim, while there are only about 161,000 Catholics living in the country, according to 2020 Vatican statistics.

There are two Catholic churches and 20 Catholic priests.

Pope Francis was asked a question about an apparent lack of transparency regarding canonical sanctions taken by the Vatican against priests or bishops in cases of abuse.

He said the Catholic Church’s approach to the abuse crisis has been a work-in-progress, especially following the 2002 revelations in the Archdiocese of Boston.

“We are working,” he said. “Know that there are people in the Church who still do not see [the problem] clearly, they do not share. It’s a process that we are carrying out with courage, and not all of us have courage, sometimes the temptation to compromise comes to you. We are all slaves to our sins as well.”

“But the desire of the Church is to make everything clear,” he added, noting that he recently received two complaints of abuse “that had been covered up and not criticized well by the Church.”

“Immediately I said: a new study is being done and a new judgment is being made.”

“We are sinners you know, and the first thing we have to feel is shame, deep shame of that,” he said. “I think shame is a grace.”

He praised the work of Cardinal Seán O’Malley, OFM Cap, who has fought abuse in the Catholic Church as archbishop of Boston and as president of the Pontifical Commission for the Protection of Minors in the Vatican.

Responding to a question about the war in Ukraine, the pope said the Vatican Secretariat of State is working very hard behind the scenes to encourage peace.

Francis said he had proposed a meeting in Moscow with Russian President Vladimir Putin. “I said I was willing to go to Moscow to talk to Putin if he needed to, I was very politely answered by [Minister of Foreign Affairs Sergey] Lavrov who [said] thank you, but for the time being it was not necessary.”

“From that moment we became very interested,” the pope said.

On the topic of interfaith dialogue, Pope Francis said to let “theologians discuss theological issues. But we should walk together as brothers and sisters.”

Addressing a Muslim journalist from Bahrain, he said: “In your country, there is room for everyone.”

Pope Francis addressed the political crisis in Lebanon in response to a question from a Lebanese journalist.

He appealed to Lebanese leaders, urging them to reach agreements for the good of the country. “First God, then country, then personal interests,” he said.

Francis was also asked to comment on the declining Catholic community in Germany in light of the very small Catholic population on the Arabian Peninsula.

The pope said Germans should not “lose the religious sense of the people.”

He encouraged German Catholics to pay attention to the faith of ordinary Catholics, such as their own grandmothers, and said theological issues are not always the heart of the problem.

The pope also repeated a joke he has made in the past, warning the Catholic Church in Germany to not lose its identity.

“I say to German Catholics: Germany has a great evangelical church, I don’t want another one that will not be as good as that one [that] I want Catholic in fraternity with the evangelical [church],” he said.

So, about all those swear words in 'Father Stu': A cleaned-up version is on the way! 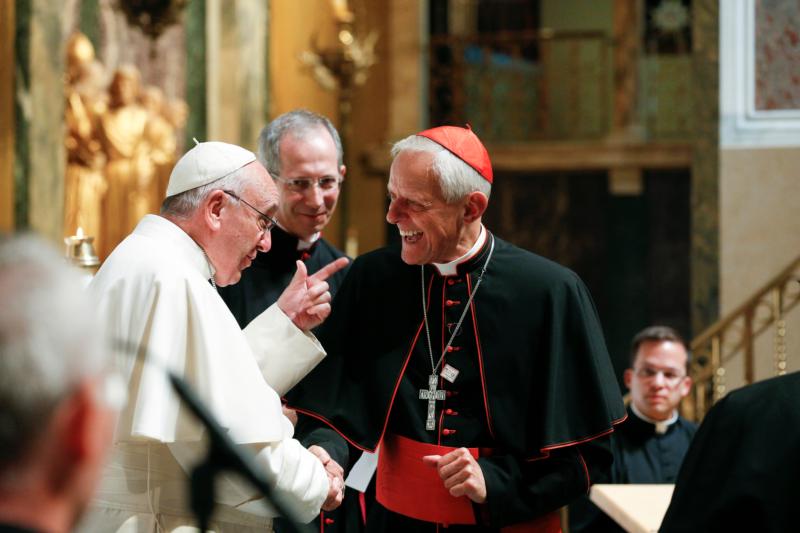