An educator with years of experience in special education was recently named superintendent of a Chicago-area Catholic diocese. He aims to ensure that all kids can go to Catholic school who want to.

“[Special education] is about being an advocate— getting support and services for individual students so that they can be successful regardless, whatever the disability or whatever the challenge might be,” Dr. Michael Boyle told CNA.

The Diocese of Joliet, Illinois announced last week that Boyle will be its diocesan superintendent of schools, beginning July 6.

The school system serves nearly 17,000 students in 42 elementary schools, eight high schools and two preschools, according to the diocese.

“I think what I’m looking forward to doing as a superintendent is being able to kind of sit back, support, provide the kinds of supports to make sure that these wonderful people can continue to do the wonderful jobs that they’re doing.”

While the idea of special education in Catholic schools is nothing new, Boyle said he often seeks to “reintroduce” teachers and school administrators to the idea that inclusive education— working to allow any child to attend the school, regardless of disability— is not just a nice thing to do, but is in fact a mandate from the Church.

The bishops of the United State released a pastoral letter on persons with disabilities back in 1978, he said, challenging Catholic schools, both elementary and secondary, to be inclusive.

At that job, he created the district’s first inclusive preschool.

He later became principal of their parish’s Catholic school. Through that experience, he saw firsthand how important it was that the school make the effort to educate children with special needs in the same classrooms as children who learn typically.

“Even for kids with some significant disabilities or challenges, with an inclusive setting, it really not only benefited the kid, but— I saw with my own eyes— it also benefited other kids,” Boyle said.

In a 2016 document for the NCEA, Boyle enumerates the layers of support a Catholic school system can provide in order to foster effective inclusive education across all its schools.

Most of the legwork in educating students with special needs is done by the teachers, so at the classroom level teachers need to be equipped with the knowledge and skills key to working with students with disabilities, and be inspired with the right dispositions toward those students.

“At the classroom level, how are we supporting teachers in terms of building the skills, the competencies and the dispositions to be able to really kind of approach that?” he said.

At the level of the school, Boyle wrote that school leaders need to equip themselves with knowledge and skills related to special education, develop policies and protocols for teachers to follow, and also should be prepared to model for teachers the disposition that serving those with disabilities “brings to life our obligations under Catholic Social Teaching.”

Finally, at the diocesan level, the bishop should be prepared to offer support and sharing of resources so that every school can offer a high level of inclusive education, Boyle wrote.

“We can’t just do an inclusionary approach on a class by class basis, we also have to look at the school’s system,” he added.

As Joliet’s new superintendent, Boyle’s work will include a focus on big-picture, system-wide approaches to expanding special education in the Catholic school system— giving schools the leadership and training they need in order that “all kids who want to avail themselves of a Catholic education, can.”

Boyle said it would be ideal if every diocese hired someone to manage their special education programs.

“As we all know the challenges— especially as we’re coming back now from COVID-19— the economic challenges facing schools are going to be critical. And most dioceses, quite frankly, are not going to be in a position to be able to do that. So I think what we have to do is we have to think about ways to maximize resources,” he said.

“I think where people have a hard time is that when everything gets dumped on one person…and so building all the members of the school community to be able to do this kind of work is really critical.”

For those dioceses not in a position to hire someone new to oversee special education, he suggested a certificate program he helped to create, which aims to help educators learn how to build an inclusive school.

At the diocesan level, Boyle said the bishops of several dioceses across the country have worked to prioritize special education in recent years.

He pointed to the dioceses of Arlington, Virginia and Phoenix, Arizona, whose bishops have made inclusive education a priority for their schools.

His goal, he said, is to ensure that the excellent, inclusive practices of many Catholic schools across the country are replicated throughout each diocese.

“We just don’t want to just include to include, we also want it to be an excellent education because that’s what a Catholic education should be, right? It should be academically excellent and identifiably Catholic.”

The National Catholic Educational Association recently warned that at least 100 Catholic elementary and high schools across the United States will not reopen for the fall semester, with many suffering from low enrollment and decreased donations amid the COVID-19 pandemic.

Despite this, Sister Dale MacDonald, NCEA public policy director, told CNA last week that about 2,000 Catholic schools across the country have not experienced massive enrollment declines, but instead have waiting lists.

For most Catholic schools, MacDonald said, about 80% of their operating budget comes from tuition. In addition, many Catholic schools hold major fundraisers in the spring, which had to be canceled or postponed after the pandemic hit.

Religious sisters risk lives to rescue the vulnerable amid pandemic

Tradition of “praying the steps” continues in 2016 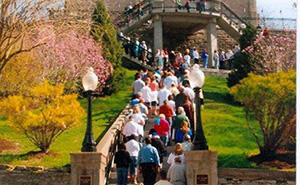