St. Lawrence celebrates 150 years as ‘Beacon on the Hill’

The Price Hill neighborhood, founded primarily by German-Catholic families migrating to the high ground from Cincinnati’s West End, has changed in recent years. Yet the “Beacon on the Hill” promises to shine for years to come. The Gothic spires of St. Lawrence, known as the Mother Church of the many parishes in Price Hill, dominates the area around Glenway and Warsaw Avenues, where it has beckoned worshippers for 150 years.

The parish anniversary was celebrated Aug. 10, the feast of the patron saint, with Mass celebrated by Archbishop Dennis M. Schnurr. More than 350 people gathered for the dinner that followed, and the 365 students attending St. Lawrence School were treated to a cookout on Sept. 14, said Father Mark Watkins, pastor.

While Father Watkins politely declined to “speculate” on the future of the parish, his parishioners were eager to pull out the crystal ball. They see a vibrant future with a dedicated and popular pastor at the helm, a healthy school with outstanding faculty and staff, deep roots that extend well beyond the traditional parish boundaries; and a long legacy of serving west-side Catholics.

“An interesting thing is that our parishioners are willing to give back financially whenever there is a problem,” said Ginger Cheeseman, who returned to her home parish in 2004 after raising her children in St. Antoninus Parish. Cheeseman still lives in her Green Township home. She just returned to her home church.

St. Lawrence fosters “a life-long connection,” she said. “There are so many people my age (early 70s) who are now back there and St. Lawrence needs those people to be putting their money in the collection basket and they do.”

“Parishioners are willing to give back financially whenever there is a problem like the air conditioning. We needed $250,000 and had it in a heartbeat. When there was a roof problem in the sanctuary, the people took care of that. And, at St. Lawrence, there is never, ever, a talk about money from the pulpit. When we need something, the people give it. That legacy right there translates into a promising future,” said Cheeseman, a retired teacher who serves on the parish’s Education Council.

“The school is so phenomenal and it is educating a group of people who will continue to come back.” Cheeseman added.

While the school owes some of its success and its enrollment to the voucher program, which enables families, Catholic and non-Catholic, to choose St. Lawrence over the public school system, more than 50 percent of enrollment is Catholic. Among those Catholic families is Nick and Cathy Lageman and their children Emma, 13, in eighth grade; Leah, 10, in fifth; Adam, eight, in third, and Evan, three.

“Just from my own experience, because of the vouchers, there is a wide range of kids from different backgrounds and it is socioeconomically diverse,” said Nick Lageman. “This opens our kids up to seeing a lot of different things . Our kids are interacting with a more diverse population. That gives our kids a cross-section of the society they live in. I also like the fact we got to know all of the teachers and I’ve been pretty impressed with how well they work with the kids.”

“If you look at the parents who send their kids there and go to church there, it’s a small percentage of the population. We have Father Watkins who created an education fund for the school — a second collection — and he regularly on Sundays would talk about how well it was doing; how great it was,” he said.

The Lageman plan is to maintain the Catholic Price Hill tradition “and send our kids to Elder and Seton. I know Emma has her heart set on Seton and she has Seton gear and stuff. Adam is really into Elder. He has Elder shirts and pants. He’s decked out,” Lageman said.

Bill Auferman, with his wife, Sue, bought a Price Hill home 20 years ago and, after a stint at St. William, joined St. Lawrence. They bucked a trend, moving from suburban Forest Park to the city.

“When we moved onto our street, a lot of the homes were owned by senior citizens living in them. The neighborhood has changed a lot in 20 years. What happened is a lot of the senior citizens sold their homes to investors who turned them into rental properties. Now you no longer have owner-occupied homes, but tenant occupied homes,” said Auferman, who is parish scoutmaster, Cub Scout master, server trainer and Grand Knight of the Knights of Columbus Council.

“What has happened,” said Auferman, “is a new pastor – Father Watkins, and there are deep roots. People keep coming back to the church and he recognizes it. It’s a beautiful church with a pastor who never gives the church a black eye. He’s a very honorable man. We all appreciate what he does.”

“I see people coming in and we have a lot of young people coming in on their own. It is not only old people who have been in the church for years. In 10 years, the parish will still be surviving and thriving. I don’t see a lot of change. It may even keep growing because there’s a very strong foundation here.” 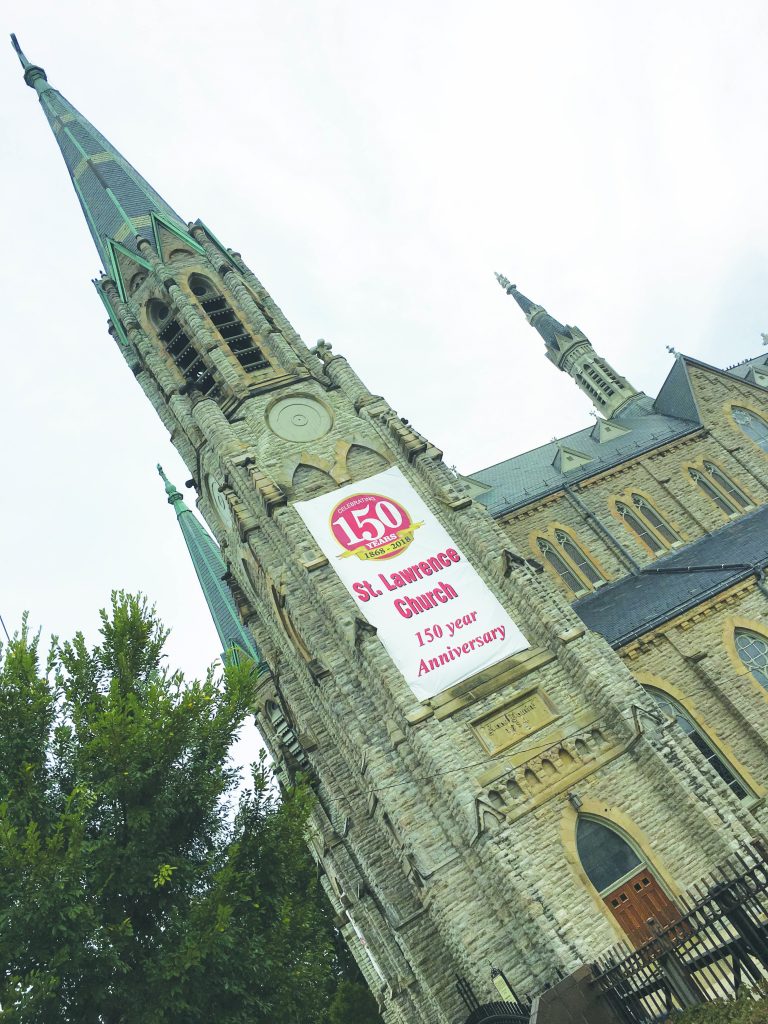 St. Lawrence celebrates 150 years as ‘Beacon on the Hill’