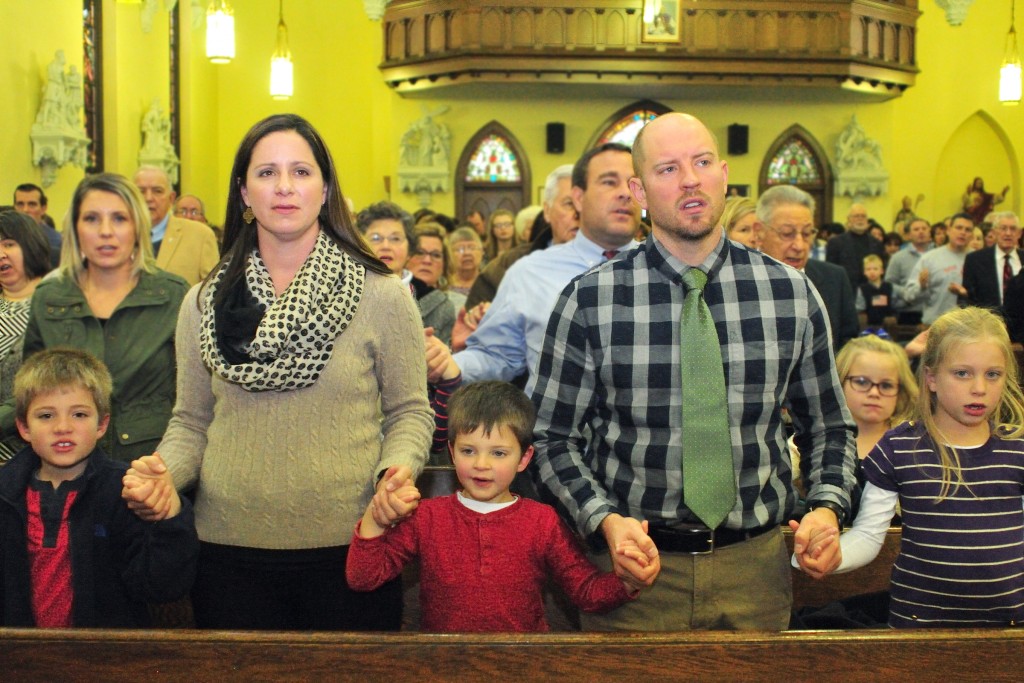 In 1906, a young priest, Father Anthony Mentink, arrived at St. Patrick in Troy on the saint’s feast day for a temporary assignment. He stayed 52 years working until the end, dying at his desk.

Much loved by parishioners, Father Mentink was a driving force for the construction of the 100-year-old, Gothic-style church, where the parish, founded in 1857, still worships. He also inspired the congregation to fund $49,000 for programs such as his appeal for “a penny a day” from church members. A quilt raffled off as was re-discovered in good condition in 1972 and is on display at the Parish Center. A new Ohio Star centennial quilt was raffled in November, along with a second prize Stars & Stripes quilt, and a third prize St. Patrick green and white afghan.

Restoration has occurred a few over the past 100 years, including major work in 1982, and repairs to some of the stained glass. The $136,000 cost was nearly three times the original construction. The three largest stained glass windows represent faith, hope and charity. The faith window depicts the Resurrection; the hope window, the Nativity; and charity window, the apparition of the Sacred Heart to St. Margaret Mary Alocoque. A portion of the 2016 centennial fundraising went to publish a book on the windows, true visual jewels of the church.

Although the cornerstone had been laid in May 1916, the first Mass was celebrated on Thanksgiving that year by Father Mentink, so the finale of the year-long centennial festivities took place Dec. 11 with a Mass of Thanksgiving. Celebrated by Archbishop Dennis M. Schnurr with assistance from Deacon John Carlin, the church was “filled to capacity, a mixture of longtime parishioners, numerous children and young people, the adult choir and the brass choir,” said Father Jim Duell, pastor of St. Patrick for the past seven years. Several priests with ties to St. Patrick Parish, such as Fathers Gene Vonderhaar, Hank Albeitz and Joe Kozar, also attended.

Likewise, Father Dan Utrecht, who grew up in the parish but now lives in Toronto, returned for the celebration at his boyhood spiritual home. Servers at the Mass included a mixture of students in grade school and high school, and even one college freshman. Lectors reflected the generations, with veteran lector Keith Lins and his grandson, high schooler Danny Lins, both reading. Extraordinary ministers of Holy Communion represented families with children in St. Patrick School, as well as the parish’s faith formation program. More than 345 people attended dinner in the Parish Center following the Mass.

“We all have much to give thanks to our ancestors in faith who, 100 years ago, gave thanks to God even in difficult times because they had a spiritual home to gather in, pray with and for each other, and ask God to bless their efforts. ‘Let us go rejoicing to the House of Our Lord’ (Psalm 122). May God bless not only our worship space, but also the church faithful who gather within to give God praise and continue the work of Christ to those beyond the church walls,” Father Duell said.

For more pictures of this celebration, click on here

US bishops offer prayers, pledge to engage with Biden administration