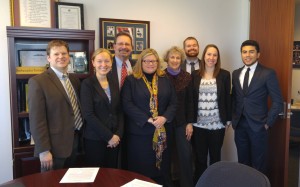 Regarding the impact of the administration’s recent executive order on refugee resettlement programs, the delegation specifically explained some of the hardships that the drastic halt to the program was having on the lives of these victims of war and persecution.  They shared reports from Catholic Charities about refugee families in camps, who had already been subject to extensive vetting by the U.S. government, finding out just before leaving that they could no longer be resettled.

In addition, Connie was interested in learning about the disruption the policy was having on resettlement programs, which simply can’t shut down for four months without serious impact to their programming. While the Catholic bishops have no objections to reviews of the refugee vetting process, the delegation echoed the Senator’s public observations that the way the executive order was handled was unnecessarily harmful to refugees and the programs that resettle them.

Kurt Grossman from the American Jewish Committee expressed his passion for kindness to refugees, recognizing that it’s an opportunity to return the favor to those who saved and resettled countless Jewish families during World War II.

On the topic of immigration reform, we reiterated the U.S. bishops’ position that any additional enforcement measures should be coupled with a commitment to fix the broken immigration system it seeks to enforce.

Sr. Tracy Kemme, who works at Holy Family Church in Price Hill, relayed the fears of the Catholic immigrants there, who are preparing for how to respond should their families be broken up by immigration officials.

Jose Cabrerra, a young man from the Intercommunity Justice and Peace Center currently recognized under the Deferred Action for Childhood Arrivals program, offered statistics on the wealth of economic and social contributions young immigrants offer America.

These conversations with local Congressional delegates will continue throughout February on such issues as immigration, respect life, universal health care, and international assistance and development as part of a nation-wide advocacy effort coordinated through the U.S. Conference of Catholic Bishops.

For more on The United States Conference of Catholic Bishops Refugee and Immigration, click here