“[Jesus] taught them how to serve,” Patrick said of the Gospel story. “The love of Christ and service to others are intertwined.”

A veteran broadcaster and former television news anchor, Patrick now hosts a morning show on Sacred Heart Catholic Radio, based in Cincinnati. The show is also heard on EWTN.

In his address, Patrick mentioned Mother Teresa and her service to the poor. “She saw Jesus in every soul that was served,” he said.

With the theme “Journey Together Toward Holiness,” meeting organizers spoke of the importance of working together. Among the reasons the Society of St. Vincent de Paul is effective is that members don’t try to do the work alone, Patrick said.

“We have some people that are in leadership positions,” said Liz Carter, executive director of the Society of St. Vincent de Paul Cincinnati district. “The nice thing about this meeting is that you also get people that are involved in the parish level. You really get people who are on the front lines. It was really a nice mix of people from all different levels.”

“It really was a wonderful opportunity on a practical level to share among all the different groups best practices . . . but do that in the light of the faith and the life of the Gospel we’re called to live,” Carter said. “We do look forward to going to the other locations so we can get ideas that we can bring back to Cincinnati.”

Tim Lewis, SVDP district council president in Lexington, Ky., said the meeting was “an opportunity to share information. We hope to gain information to find out what others are doing. Hopefully, that will help us run our society better.”

Joseph Flannigan, SVDP national president, reported on several topics from the national perspective, including a new emphasis on attracting young people to SVDP.

“It’s important for the church and the country because it gives young people a sense of responsibility for all humanity and allows them to see the face of the poor one-on-one,” he said after addressing the meeting. “It’s not theoretical.”

The meeting opened with a Mass celebrated by newly ordained Father David Endres, who has been active in the local SVDP since college.

“I really wanted to encourage them in their work,” Father Endres said. “It’s an opportunity for people to do Christ-inspired service. Christ called [us] to serve others.”

Michael Warsaw: ‘For the good of humanity,’ Senate must reject ‘horrific’ abortion bill 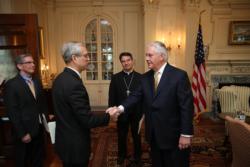