On June 5, Ohio Governor John Kaisch signed a bill directing a section of Ohio 264 (Glenway Avenue) between Beech and Gilsey Avenues be renamed the Elder High School Vietnam Veterans Memorial Highway. In addition to a large sign marking the name of the road, Elder will attach an auxiliary marker each month for the first year marking the name of one of the “Elder 11,” the name given to the group of a near-dozen Elder graduates that were killed in action in the Vietnam War.

After the first year, the auxiliary marker will be changed yearly. A 12th honoree, “Elder’s 12th Man” will be added to honor those who died later in life as a result of their service in Vietnam.

Fall-like weather prevailed Sept. 20 with wind whipping the dozens of flags surrounding the parking lot at Elder’s Rev. Jerome A. Schaeper Center. A large crowd of alumni, veterans, local dignitaries and a detachment from the Ohio Patriot Guard Riders motorcycle group listened as members of the Elder family and community told the story of the Elder 11, and how this memorial came about.

After the work of Elder’s class of 1966 and the Elder 11 Committee, the bill was introduced to the Ohio House as HB373 (later SB245) by State Representative — and Elder graduate — Lou Terhar (R-Green Township). A co-sponsor of the bill was State Representative Denise Driehaus (D-Cincinnati). The bipartisan bill, which also designated other memorial highways in the state, was unanimously passed through the house and Ohio State Senate.

Driehaus, a Seton graduate, spoke at the dedication on behalf of Terhar who had a prior commitment.

“This is a solemn occasion but it is also a celebration of the lives of the young men for whom Glenway is being named,” she said. “It is no coincidence that the roadway in front of Elder was chosen… Elder is a good place where men learn about character, and about service and about justice and what it means to be part of a community.”

Speaking to The Catholic Telegraph after the event, Driehaus reiterated her gratitude to the Elder 11 Committee for their efforts.

“The committee here of men from Elder drove this process,” she said. “Representative Terhar then introduced it on their behalf and drove it through the legislature. Without the committee, this doesn’t happen.”

State Senator Bill Seitz (R-Cincinnati) also spoke, telling the crowd the sacrifice of the Elder 11 was not in vain. He added that the memorial highway honors all Elder’s men who served in Vietnam, not only the 11 who died.

Families of the Elder 11 were in attendance, including the last surviving parents of one of the deceased. Jim and Norene Caruso, parents of David Caruso, were presented with a memorial hat and flowers.

Retired US Navy Captain Michael Vogt, son of the first Elder graduate to be killed in Vietnam, spoke on behalf of the families. Leonard Voght Jr. was killed 49 years and two days earlier while flying a mission over Hanoi on Sept. 18, 1965. In Captain Vogt’s words, his father was “the first of 11 heroes to share this unusual honor.

“I’m grateful to the many patriots and Elder family members who are responsible for this unexpected tribute,” he said.

The ceremony included performances by the Elder Vocal Ensemble and the Elder Honor Guard.

Dan Hendy, who made the opening remarks, is part of the Elder class of 1966. The class of ’66 lost four members to Vietnam and has been active in honoring the memory of all of the Elder 11.

“May all who travel this way be ever mindful of the courage and valor displayed by these young men,” he prayed. “Continue to watch over our men and women in the military who safeguard our freedom.” 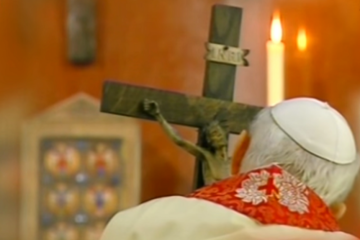