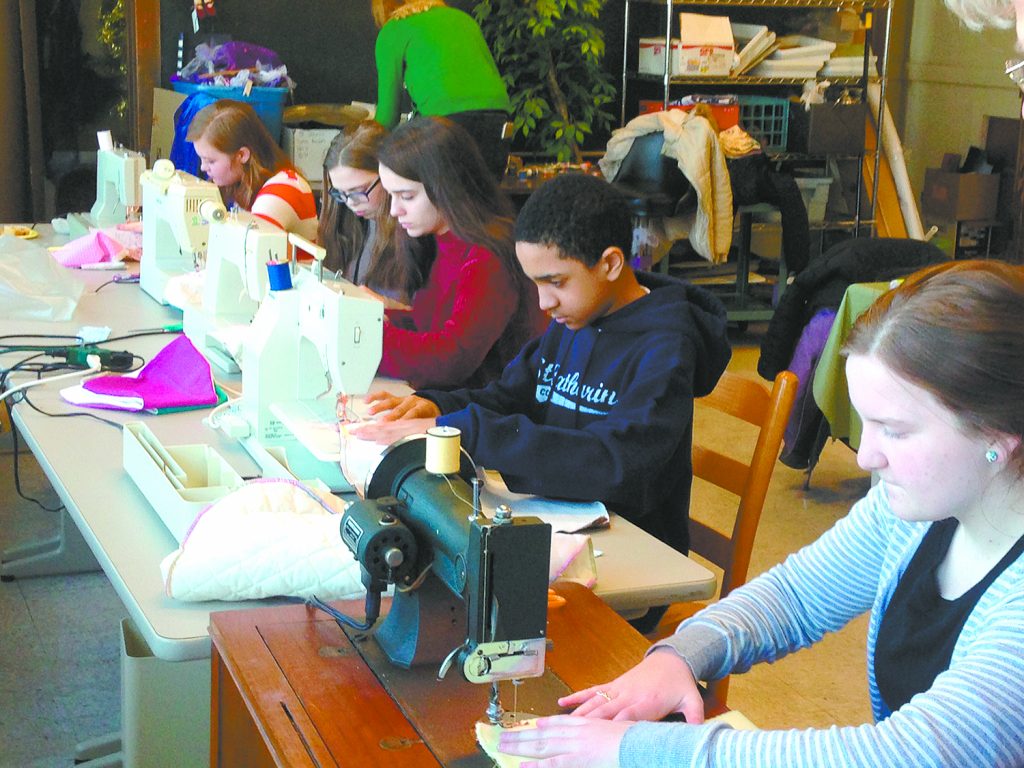 A ‘common thread’ between sewing and service

Students who are learning to master a new skill have become the common thread between sewing and service.

“Common Thread” is the name of the sewing group at St. Catharine of Siena Parish in Westwood. Every other Sunday after the 9 a.m. Mass, a handful of students ranging from sixth-graders to sophomores meet for about two hours in a room inside the parish school to sew items for charity. Some of their moms set up snacks in the corner, while other adults with more sewing experience offer tips to the kids. The room is set up with six sewing stations, two places to iron, and many tables filled with and cut out pieces ready to be sewn  and finished products ready to be delivered.

The kids recently added a new client, and are making mini-totes and chemo port pillows for Mercy Health-West Hospital.

Murphy helped organize the group a year and a half ago after her daughter and her friends wanted to learn to sew. She said she’d teach them if they promised to stick with it and sew for a service. They did, and now their mission is expanding. On a recent Sunday morning, the group handed over more than three dozen hand-made pillow cases, some with delicate piping and others with fancy stitching, to the parish chapter of the Society of St. Vincent de Paul (SVdP).

“The pillow slips are so beautiful,” said SVdP’s Therese Bower-Hibdon. “To give these to people that have nothing, it means so much.”

The kids work at their own pace and take some of the work home with them to meet their deadlines. Everything they use is donated—sewing machines, fabric, thread, hook and loop tape, and irons. On the wish list is a Singer 47w70 darning machine. The five girls and one boy keep a record of their work. They’ve put in more than 1,800 hours and turned out more than 2,500 pieces, at an estimated value of $15,436. Most of the items go to Cincinnati Children’s Hospital Medical Center.

“I like it because a lot of the babies at the hospital don’t get to do fun things that healthy kids do,” said Maddie Murphy, a sophomore at Mother of Mercy High School and president of the group. She said the little patients have “a lot of sterile and crisp white things they have to look at all the time. It’s nice to know they’ll be happy with little patterns and stuff.”

Peggy Spetz is the group’s vice president and also a Mercy sophomore. She had never touched a sewing machine before this project.

“I’ve been getting a lot out of it,” said Spetz. “I love helping the kids at Children’s. It’s been a good cause and I like learning a new skill, too.”

“It just gives me a good feeling, what I’m doing. I know it’s for a great cause,” she said.

Noel Watkins, a sophomore at Seton High School, is the treasurer and learned something about herself after joining the group.

“It’s taught me to not take things for granted as much,” she said. “If I help other people, it feels a lot better to me, and I can feel good about myself.”

Sixth-grader Caleb Malone is the lone boy of the group. He attends St. Catharine of Siena School and said he wanted to do something to help Murphy, who is his Boy Scout leader. His work will earn him a textile merit badge that he’ll be able to sew onto his own sash.

“This is such a good skill because it takes in problem-solving, it takes in, kind of, engineering.  They’ve got to think inside out and backwards,” said Murphy. “They have to think through quality of workmanship, and they’ve stuck with it.”

About 15 to 20 “members-at-large” donate time to help the kids hone their sewing skills. Support for the group has extended well beyond parish into the Clermont County, Anderson Township,
and West Chester.

“That was my goal: to be a mentor, because the lady that taught me to sew, I felt like that is what she gave me,” said Terry Newton, who offered her services after hearing about the group and meeting some members at the Westwood Art Show last September. “And this is my chance to give back. I just love what they’re doing.”

Julie Oldendick comes from Union Township Clermont County and brings her two daughters, Pippie and Sadie. They sew and she knits. Oldendick has contributed knit hats for babies in the neonatal intensive care unit to the Common Thread cause.

The group has such a good reputation that Children’s Hospital now counts on its donations each quarter, Murphy said it’s the only group made up of high school and middle school students that sews for the hospital, and when people learn the pieces were made by kids, Murphy said, they are stunned.

“I will tell you the miracle of St. Catharine, the saint, her presence has been in this since the beginning,” she said.  “At every quarter, I think ‘Oh we’re not going to hit this goal,’ then all of a sudden things show up, and it comes together and, to me, that’s the miracle of it.” 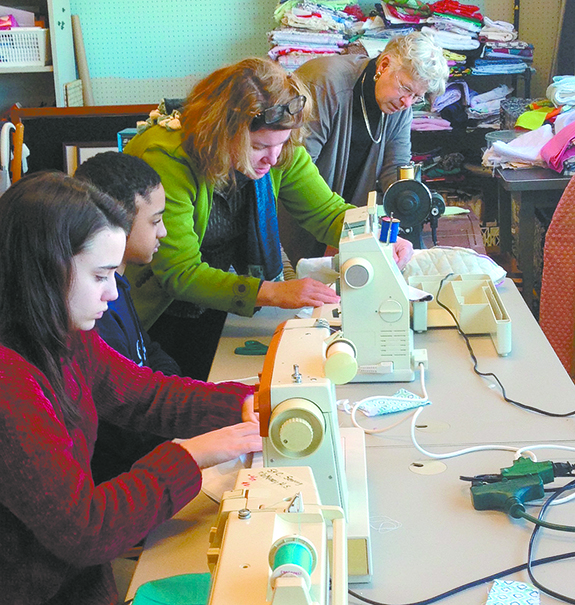 Reds Fans donate 3,000 lbs of Food to Neighbors in Need