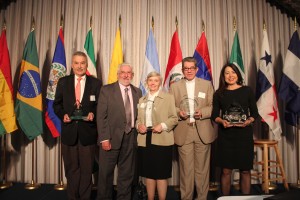 Adapting to a new culture and lifestyle can be difficult, especially if there is a language barrier. One organization and three individuals who help immigrants navigate their way to self-sufficiency as they settle down in the Cincinnati area were recently honored for all their work by Su Casa Hispanic Center in Cincinnati.

Su Casa is one of the many social service agencies offered by Catholic Charities of Southwestern Ohio. An awards dinner held at the Cintas Center on April 25 recognized Father Samuel Gonzalez, Congregation of Divine Providence Sister Alice Gerdeman, Laura Moese and the Hispanic Chamber of Commerce Cincinnati USA for their work in guiding, mentoring and assisting those who come here seeking a better life.

A native of Mexico, Moese came to Cincinnati in 1978 because of her work with P&G. Moese is a member of the Su Casa advisory board and works with three different programs: Adopt a Family; Vacaciones Utiles, a summer program for young children that helps them prepare for school; and a fairly new domestic violence prevention program. She received the Volunteer of the Year award.

“I was very lucky growing up,” she said. “I always had great people around me. When I least expected it there was somebody reaching out to me.”

Father Gonzalez is from Colombia, South America. Violence and political persecution forced him to flee his homeland 13 years ago and with the help of those at Su Casa, he is now a priest in the Archdiocese of Cincinnati ministering to the growing number of Hispanics and Latinos. He currently serves as the associate director of the Catholic Hispanic Ministry in Dayton.

“One of the most important things for me is to preserve the culture, preserve religiosity,” he said.

Father Gonzalez’s congregation is growing as more immigrants make their way to Southwestern Ohio. Its members can feel comfortable attending Mass in their native tongue and with the devotions to the Blessed Virgin Mary that are popular in Spanish speaking countries. His 47 years of consistent pastoral work earned him the Lifetime Achievement Award from Su Casa.

Traditions are important he says, but so is finding and shaping good young leaders in the community. He said his passion is to “train and education competent leaders” in the community who can continue the traditions.

“I’m honored,” she said. “It’s an honor to be given an award by people who also believe in some of the same things you do.”

Immigration is one of the things on which the Intercommunity Justice & Peace Center focuses. “We do general education,” said Sister Alice, “around rules, laws, injustices, our hopes and dreams for reform.” A group called YES, which stands for Youth Educating Society, helps young immigrants and their friends find their places in society and share with others their life experiences. Sister Alice has been doing this type of work since 1973. She is well versed on the topic of immigration reform, which is soon to be debated again in Washington.

“Our borders will be less porous when people have a legal way of moving back and forth,” she said.

The Hispanic Chamber Cincinnati USA received the Organization of the Year award for the work it does growing and developing businesses in the Hispanic and Latino community. Alfonso Cornejo, president of the Hispanic Chamber accepted the award on its behalf. The evening also featured a silent auction with the money raised going to support the programs Su Casa sponsors.

The multiple presences of Christ keep me Catholic 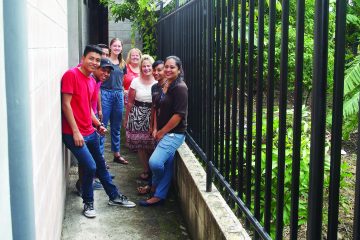