June 27, 2022 The Catholic Telegraph
Home»Commentary»Sunday Scripture: They are stealing our thunder
Commentary

Sunday Scripture: They are stealing our thunder

When a ministry or a project is going well it is a human inclination to protect it from the intervention of other people. We have two instances of that in today’s readings, and it is worth noting that they occurred at about 3,000 years apart. In other words, it is a syndrome of long standing.

In salvation history each of the two incidents had to be dealt with by a great leader of the time — Moses and Jesus. In the case of Mose, the Lord placed some of the Spirit that was on Moses on 70 of the elders who were at the tent, and they prophesied.

It happened that Eldad and Medad, who had remained in the camp, also received the Spirit and prophesied in the camp. Two of the young men in their undisciplined fervor quickly reported the happening to Moses, “They are stealing your thunder!”

The response of Moses was simple and direct. “Are you jealous for my sake? Would that all the people of the Lord were prophets.”

In the case of Jesus with His disciples, a man not of their company was casting out demons in Jesus’ name. The disciples stopped him and reported to the master. “They are stealing our thunder!”

Jesus’ response was similarly direct. “Do not forbid him. For he who is not against us is for us.” (Mark 9:38-40)  The disciples evidently thought that the mighty works of Jesus belonged to Him and to His followers, so no one else could validly participate in the use of them.

The Lord quickly put that idea to rest: “Whoever gives you a cup of water to drink because you bear the name of Christ, will by no means lose his reward.” One who does a good thing for you is doing you a favor and will receive the appropriate reward. Thus He affirmed the value of even small works of mercy and opened up His ministry to those not among His immediate associates.

Jesus could have used Moses’ response: “Are you jealous for my sake?”

In our second reading James urges the Christian community to be just to everyone whose services they use, and to be compassionate to those in need. It is not that they are to impoverish themselves, but they are being called to a sense of justice in not refusing the means of livelihood to others while accumulating more wealth for themselves.

The members of the church were reminded of the folly of misusing wealth, for on the day of judgment they will themselves experience eternal downfall. Riches can be a means of doing much good in society, but misused riches corrupt their owners and cause hardship for those who look for help from the rest of society.

To back up these thoughts we might look at Ben Sirah’s comment: “To take away a neighbor’s living is to murder him; to deprive an employee of his wages is to shed blood” (Sirach 34:22). Also, to read through the Book of Wisdom, we see that disregarding the righteous is parallel to rebelling against the Lord. The hope of the unrighteous ones is in vain, their labors are unprofitable, and their works are useless.

In following the Psalmist’s thought, we see that the ordinances of the Lord are righteous altogether, more to be desired than much fine gold.

Sunday Scripture: They are stealing our thunder

When disaster and devastation strikes: A 1 minute video of our Brothers and Sisters in Puerto Rico 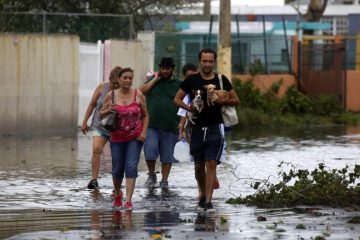