December 4, 2022 Catholic News Agency
Home»Commentary»Sunday Scripture: Who do you say that I am?
Commentary

Sunday Scripture: Who do you say that I am?

As we have followed the Gospels of Mark we have noticed several incidents that contribute to an understanding of the identity of Jesus. In our Gospel reading for this week we have another such incident introduced by Jesus himself in His conversation with His disciples.

He asked them two questions.

Jesus instructed the disciples not to give out that information about Him at that time. Perhaps it was not yet the time for that announcement. Or, on the other hand, maybe it is another instance of the use of the Markan Secret.  However, if that were the case, then there would likely have been a public announcement of the information. In fact, what Jesus began to preach was something different. He made a prediction of His passion, death and resurrection. Whereas Peter had at first answered very clearly about Jesus’ identity, he nevertheless did not display clarity on the point that the Messiah would suffer.

Messianic hopes in the Hebrew Scriptures usually involved expectation of temporal peace and well-being for the nation of Israel. They looked for a king like David to bring prosperity and security throughout the realm and protection from external aggression.

In Peter’s response about Jesus’ Messianic identity there may have been remnants of that thinking, and clearly the prediction of suffering and death for Jesus as Messiah did not fit the picture.  It was a whole reversal of the popular assumption.

Jesus rebuked Peter very strongly, as much as telling him that he had not listened to the Master. Two ideas may be involved in Jesus’ calling Peter a “Satan.”  Maybe Jesus was intimating that this was another of the temptations like those to which He had been subjected at the beginning of His public life (Mark 1:13).

Or, maybe the Hebrew word Satan, which refers to something like an aggravator, was used to describe Peter’s action here.

In either case, though, Peter had correctly identified Jesus in this passage as Messiah, and on another occasion declared that his faith would not be shaken, he later made a threefold denial of even knowing Jesus.

Peter seems to have had a hard time getting all of this straight. Even after the resurrection when his threefold avowal of love for Jesus seemed to have brought it all in line, we know from history that when he was fleeing from the persecution in Rome, Jesus appeared to him and turned him around to go back to take his place among the suffering people who were faithful. Peter’s human struggles may give us something to ponder in our own faith life.

With the psalmist we can praise the Lord for saving those who call on Him in their distress. In His gracious mercy He is bountiful to those who need Him (Psalm 116).

Sunday Scripture: Who do you say that I am?

Question of Faith: In what cases can someone be denied communion? 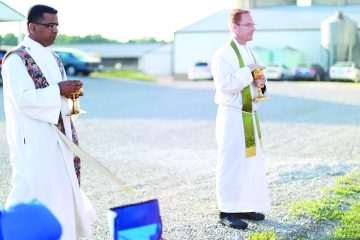