ARCHDIOCESE — The archdiocese is blessed with many architectural treasures among the Catholic churches that stand in area neighborhoods as a testament to our faith.  A number of these magnificent structures were designed by the late Cincinnati architect, Edward Schulte, whose contributions and legacy were recognized at a symposium April 17 at the Cathedral of St. Peter in Chains. Guided tours of selected Schulte churches were offered on April 18.

The weekend was sponsored by the Architectural Foundation of Cincinnati (AFC) and co-chaired by Christine Schoonover, past president of AFC and current program chair, and Father Christopher Armstrong, pastor of St. Antoninus Parish. A member of AFC, Father Armstrong’s interest in architecture developed as a seminarian at St. Gregory’s Seminary through his professor, mentor and friend Father Donald Tenoever, a professor of architecture and art history who worked closely with Schulte during the renovation of the cathedral.

More than 100 people gathered in the cathedral undercroft for “The Lord was My Client: Church Architecture of Edward J. Schulte,” presented by Denis McNamara, assistant director of the Liturgical Institute in Mundelein, Ill., and author of Catholic Church Architecture and the Spirit of the Liturgy. McNamara said he stumbled upon Schulte’s work as a graduate student 15 years ago.

“It’s one of the happiest days of my life to come here and talk about Edward Schulte,” he said. “We’re at a time when we can appreciate his work greatly.”

A native of Norwood, Schulte demonstrated a talent for drawing as a child and was encouraged to pursue his gift by the Sisters who taught him. He studied at the Cincinnati Art Academy during WWI while also working for the firm Werner and Adkins. Schulte eventually moved to Pittsburgh, where he designed movie theatres.

It was a move that “changed his life,” said McNamara. There, Schulte attended a candlelit lecture by Ralph Adams Cram, an influential American architect of collegiate and ecclesiastical buildings. “From that moment on, he decided he wanted to be a church architect,” said McNamara.

In the 1930s and 40s, Schulte designed many of Cincinnati’s most prominent churches and by the 1950s, he had risen to prominence as a prolific designer who synthesized the dominant trends of modernism with traditional ecclesiastical materials and forms. He is the only 20th century architect with four cathedral commissions.

Schulte’s early designs were very traditional, with a gothic, almost medieval look, said McNamara, citing St. Cecilia Church in Oakley, built in 1927, as an example. Over the years, his designs, including St. Gertrude Church and Priory in Madeira (1955-61), became more modern, but retained a “deep sense of churchliness and still had traditional elements.”

McNamara discussed details of various local Schulte churches including St. Monica-St. George (1926), with a traditional design and early Christian features; St. Bernard in Taylor Creek (1935), a picturesque structure in the mode of an English county church with interior and exterior walls made from local field stones; Holy Trinity in Norwood (c. 1940), built of limestone with distinctive octagonal twin towers; and Our Lord Christ the King (1953-55), a dramatic contemporary work with a monumental sculpted figure of Christ.

He also made note of Schulte’s role in the enlargement and remodeling of the Cathedral of St. Peter in Chains in the mid-50s under the leadership of then-Archbishop Karl J. Alter who decided to return the cathedral status back to the basin from St. Monica’s on the hilltop above the city.

The cathedral renovation, completed in 1957, was a $5 million project and Schulte’s largest commission.

McNamara emphasized that Schulte’s high standards of personal conduct, forthright approach with clients, total control of his projects, attention to the smallest detail and “concern with proclaiming the glory of God,” all contributed to his work.

“He showed how church architecture can be both modern and traditional at the same time,” McNamara said. “I think his relevance will continue to grow. He has given the world a great gift, as well as anyone who worships in a Schulte church.”

McNamara’s talk was followed by a discussion moderated by Father Armstrong and featuring Donald Junker of the American Institute of Architects, and Robert Flischel, photographer and publisher. A video of area Schutle churches produced by Flischel was also featured.

The tour of Schulte churches provided the opportunity to see the details of the architect’s work first hand. With support from the pastors and assisted by volunteer tour guides, interested parties were able to many of the local Schulte churches.

Father Armstrong said he was struck by a common theme that emerged in the remarks of others on the tour. “The typical response was that we don’t realize what treasures we have here in the Archdiocese of Cincinnati,” he said. “I also kept running into Edward Schulte’s grandson, who was visiting from Chicago. He was thrilled to see his grandfather’s work honored.”

“What’s interesting about Schulte is the evolution of designs, “ Father Armstrong added. “His churches aren’t cookie cutter. You can’t look at one and say, ‘That’s a Schulte church.’ His most significant contribution was the dialogue between the principals of liturgy and the principals of contemporary architecture. No other architect will probably ever equal his output. It’s remarkable.”

The video of Schulte churches can be viewed at http://www.youtube.com/watch?v=xpFy-8j-nks. Schulte is one of the architects profiled in AFC’s Architecture in Cincinnati: An Illustrated History of Designing and Building an American City, available at selected bookstores and museum shops, or online at www.architecturecincy.org. McNamara’s book can be ordered at www.amazon.com.

Chaminade-Julienne senior’s work ethic an example for others 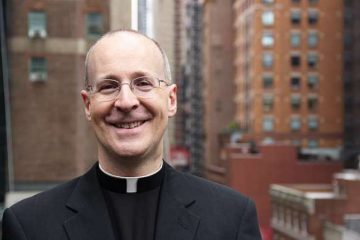