EL SALVADOR — They trudged along the footpaths of martyrs, saw history being made by joining a march in honor of the 30th anniversary of the death of Archbishop Oscar Romero and got an upfront look at the daily struggles of many Salvadorans.

Yet most of the band of 15 pilgrims who journeyed to El Salvador in March would have settled for the hugs and smiles of the children, who came out in droves to thank the visitors from St. John the Baptist Church in Harrison for sponsoring their education in two poor parishes on the outskirts of San Salvador, the capital city.

“I leave my heart every year. So I come back every year to see how it’s doing,” said Mike Tebbe, a psychology professor at the University of Cincinnati and  member of the group.

Most in the group, like Tebbe, have made the trip more than once. The parish, joined by friends of the project from outside of Harrison, has been involved over the past six years. The Ohioans contribute $400 a year apiece to educate 104 Salvadoran children in two parishes, Santa Cruz and Our Lady of Guadalupe. This twinning allows St. John the Baptist parishioners to offer assistance when they can and learn from each other.

It is a tiny investment, area Catholics say, compared to what they receive.

Deacon Don Meyer, Jr., of St. John the Baptist, is also board chairman of Cincinnati-based CRISPAZ (Christians for Peace in El Salvador), a co-sponsor of the trip. He is a long-time sponsor, with his wife Kathy, of Karen, a Salvadoran ninth-grader who wants to be a nurse.

“She was a shy little girl. She has now grown into a confident young woman,” said Deacon Meyer.

This was parishioner Diane Detmer’s third visit to El Salvador. She has a sponsorship arrangement with Nicolas, a 16-year-old.

“His English is getting much better,” she said, beaming about his progress in school. They regularly communicate with each other, and Nicolas talks about going to college, something he didn’t do a few years ago.

“He sees a future for himself,” said Detmer.

“I know that God has put him in my life for a reason,” Anthony wrote recently for her parish newsletter. She is suffering from declining eyesight, which doctors predict will result in eventual blindness, and needed assistance for much of this trip from her friends from Harrison and El Salvador as she navigated the bumpy streets.

Because of her condition, she does not expect to make another trip with the group and said her farewells to friends in both El Salvador parishes.

There was widespread talk of asking God for a miracle for her, perhaps through the intercession of Archbishop Oscar Romero, whose canonization process is being promoted by the church in El Salvador.

The events surrounding the Romero commemoration gave this particular trip added significance. A downtown march in San Salvador featured an address by President Mauricio Funes, a former television journalist elected in 2009 and the first Salvadoran chief of state to honor Archbishop Romero.

Archbishop Romero was gunned down while celebrating Mass March 24, 1980, shortly after a radio broadcast in which he urged Salvadoran soldiers to stop turning their weapons on civilians in El Salvador’s civil war.

The canonization cause entered the verification phase in 2000. In 2005, around the 25th anniversary of the prelate’s death, the Vatican informed the Salvadoran bishops that the cause had passed the first phase of verification.

Although formal canonization is a slow process, many Salvadorans have considered the archbishop a saint since his murder. His image hangs in many churches, and there are icons of “St. Romero.”

Funes’ efforts at reconciliation — among other things, he formally dedicated a mural at the international airport to Romero — offers hope that the country may finally be healing from the war.

“This marks a before and after in the history of El Salvador,” Bishop Gregorio Rosa Chavez, Auxiliary Bishop of San Salvador, said after the March 24 procession and vigil.

But justice for the killers, including those who shot Romero, remains elusive. A general amnesty for political crimes, issued after the 1992 peace accords, remains in effect. Those responsible are perceived to be still at large, some in prominent political and business positions.

The Cincinnati group visited a small chapel erected next to the site of the 1980 murders of four U.S. churchwomen who were set upon by a gang of soldiers as they went to the airport to pick up a friend. At the isolated site, marked by a simple cross memorial located deep aside a rutted unpaved road, Ursuline Sister Patricia Brockman of Cincinnati led prayers for the women:  Ursuline Sister Dorothy Kazel, Maryknoll Sisters Maura Clarke and Ita Ford, and lay missionary Jean Donovan.

The group also visited the site of the 1989 murder of six Jesuits and two lay workers at the University of Central America in San Salvador. A museum there now chronicles those murders and those of thousands of others.

While political violence has abated, El Salvador remains one of the most violent countries in the hemisphere.

The Cincinnati visitors heard about the growth of criminal gangs, who prey on the poor of the barrios and murder with impunity. Father Joaquin Melendez, Our Lady of Guadalupe pastor, said that 20 young people were murdered in his parish by criminal gangs in just the past few years.

The group heeded the call to stay off the streets after 9 p.m., the time when the gangs begin to assert their authority over the night. Firecrackers exploded outside the cathedral during a Romero commemorative Mass March 24, where retired Washington D.C. Cardinal Theodore McCarrick preached.

Deacon Meyer emphasized the importance of hearing the stories of the people so that the U.S. visitors would come away with an understanding about the situation in El Salvador. He also noted that the twinning project is not simply a case of paternalistic benevolence.

“The decision-making is here in El Salvador,” he said, while trudging through the barrio. “It is their project. We don’t tell them what to do. It’s not a case of ‘Here is what we want to do for you.’ They tell us. And we see how we can participate.”

That evidence of leadership emerging in the Salvadoran parishes was evident throughout the week. The Salvadorans laid out a proposed detailed plan; the Ohio delegation listened carefully, wondering how they can best make an impact.

Whatever future direction the twinning project takes, Father Jeff Kemper, pastor at St. John the Baptist parish and second-time visitor to El Salvador, says his parish has received much from its efforts.

He marveled at the faith of the Salvadoran parishioners who offer “generosity in the face of poverty.” The small faith communities, the crowded Masses filled with singing, and the laypeople witnessing their faith are all positive aspects of church life that made an impact on the Ohio visitors, said Father Kemper.

Five Salvadorans have visited Harrison, and many more would come if visa issues with the U.S. government could be overcome. Questions have arisen at St. John the Baptist among parishioners concerned about the church’s own needs during these recession times, although project money is completely separate from the parish budget.

Still, the give-and-take of human interaction is vital, said Father Kemper, who believes that regular contact between Cincinnati and El Salvador can only be beneficial to both.

“The way you break down barriers is you get to know people,” he said.

Feuerhard, a longtime Catholic press writer, lives in New York and traveled with the delegation to El Salvador.

A picture says a thousand words: Friars on parade 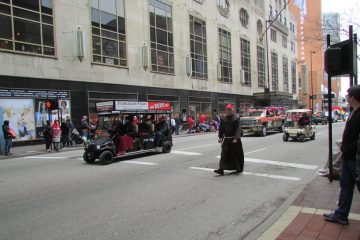