On a recent trip to Italy, I discovered my next, easy occupation. I would like to be the woman in the Sistine Chapel with a microphone shouting, “Silenzio! Silenzio!” to the hundreds of tourists who insist on making noise.

She knew it was hopeless. At the moment when someone first encounters Michelangelo’s ceiling, there is a spontaneous burst of joyful praise. What does this woman want? Then I realized she wants nothing. In the spirit of Italian reasoning, she knows no one will do what she asks. She just feels obliged to restate the rules. In fact, most of the talking was done by Italians. The Americans were trying their best to be law-abiding pilgrims.

As I stared at the breathtaking image, Creation, and at the horrific Last Judgment, I did want to be silent. These sacred scenes evoke awe, mystery and wonder. It is not a chatty moment. But we live in a noisy world in which silence is avoided.

I recently spoke with a young woman who was reflecting on her college years. She said, “I filled my mind with electronic chatter and ran around avoiding solitude and thoughtfulness. It was as if I was running from some small, quiet voice within that would call me to a truth I was not willing to hear.”

The silence required to hear God’s voice, to see with God’s eyes, to feel God’s heart, is sorely lacking in our culture. We are immersed in so much meaningless talk that we are forgetting what God sounds like. God waits for silence to speak, and God has been waiting for quite a while.

So what can we do to reconnect with silence? It will take a concerted effort to empty our minds of Facebook chatter, iPhone updates, earphone music and media overload. Let us start slowly, perhaps with early morning silence on the porch watching the sunrise or a silent ride home from work. We don’t need to have any expectations other than allowing the quiet to fall on our souls like healing balm on a searing burn.

We need to spread the practice to the rest of the family as well. Child psychologists tell us that the children of our culture do not know how to be silent. Their days are just as noisy as those of their parents. While the Boomers were children of solitary afternoons watching ants on the sidewalk or pretending to see shapes in the clouds, the millennial children want big-screen entertainment and play dates with lots of friends. Perhaps parents can reintroduce a little pause in the action each day when the house calms into silence to seek a space apart. Weaning our children from noise will not be easy, but how fine it will be to see them rediscover daydreaming and conversations with that small, still voice within.

Silence is golden; it really is. When we start turning off the world’s latest alert and start tuning in to the quiet, the uproar in our spirit subsides and a blessed peace begins. In that peace we can discover our own thoughts, not the thoughts of the latest media guru. We can allow the weather forecast to come from the breeze on our foreheads and the smell in the air. We can decide the right choice rather than respond to the shouts of the crowd. Sometimes God sends strange prophets into our lives, ones we would never suspect as speaking for Him.

In my case, it was a little Italian woman, sitting on a stool in the Sistine Chapel, shouting into a microphone, “Silenzio! Silenzio!”

Hunt is the catechetical and evangelization advisor for St. Anthony Messenger Press/Franciscan Communications.

Information meetings about diaconate this fall 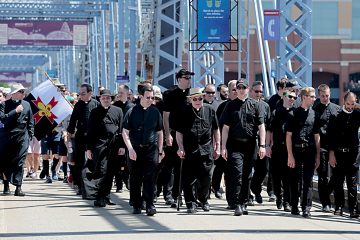