The idea of consecrating oneself to Mary, or to “Jesus through Mary,” seems to be growing in popularity among Catholics. Why is this and what does it mean?

Although Catholics throughout the centuries have been consecrating themselves to the Blessed Mother, it began to grow in popularity under the pontificate of Pope John Paul II.

The Holy Father chose as his papal motto “Totus Tuus,” a phrase which means, “Totally Yours,” and is taken from the famous book on Marian consecration by St. Louis de Montfort, called True Devotion to Mary. According to St. Pope John Paul II, reading St. Louis de Montfort’s book and making his consecration to Mary at the age of 19 was a “decisive turning point” in his life.

For some people, this step of Marian consecration is easy and comfortable, but for others, it represents something unusual, mysterious and even scary. Some people are worried that they are not worthy of it or that it will involve extra prayers and sacrifices. However, Marian consecration is not about who we are, what we have done or what we need to do, but rather it is about our hearts. It is as simple as a child needing and desiring the love and care of a mother who loves him beyond all telling.

The Blessed Mother loves and cares for all her children, but by consecrating our lives to her, we are personally inviting her to “mother” us in a special and more powerful way. The Blessed Mother is waiting for this personal invitation.

As a matter of fact, it was Our Lord’s idea. Jesus knew that life would be difficult, so He wanted to share His own Mother with us to help us. As His last gift on the Cross before He died, Jesus gave His Mother to His Beloved Disciple (St. John), who represents all baptized Christians. By this act – “Here is your son; here is your mother” – we become her spiritual children and she loves and cares for us. However, According to Pope Benedict XVI, when St. John “took her into his home,” it represents a personal action on the part of the Christian to take her into his “interior home,” his heart. This personal step is an important one and it represents Marian consecration.

The Blessed Mother knows perfectly well how to care for each of us uniquely and individually. Through your consecration, she will lead you to know yourself better, help you to have patience with others, encourage you to pray better, inspire you to love God and neighbor more, show you how to carry your crosses well and help to free you from your fears and anxieties. She will share her virtues with you and lead you to live a life of peace, trust and joy.

Consecration to Mary is not to be feared but it does require a desire to grow and change. Parents should encourage their children to consecrate themselves to the Blessed Mother from an early age. She will lead them and guide them in a special way as they navigate through the difficult periods of adolescence and young adulthood. 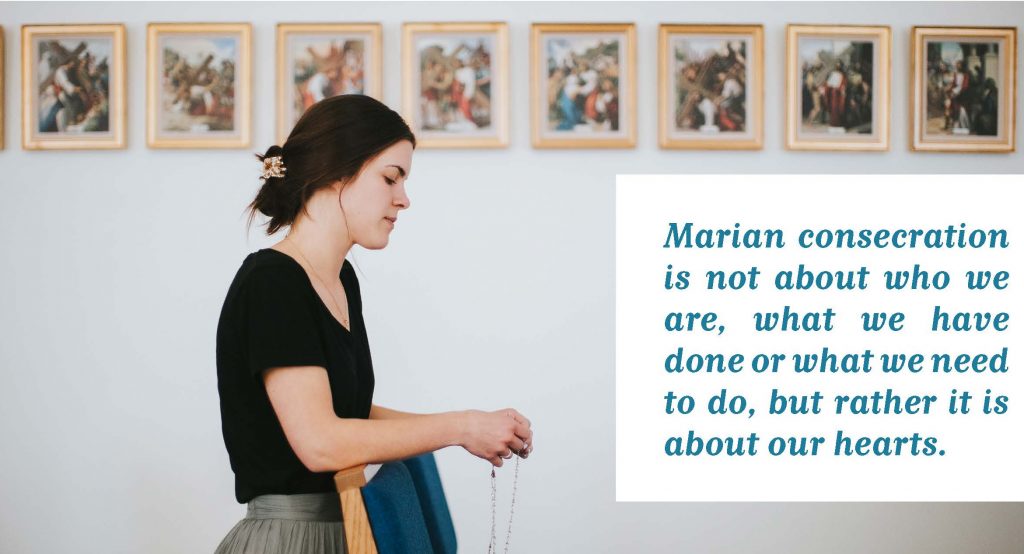 As mentioned above, a great book on Marian consecration for teens and adults is Father Michael Gaitley’s, 33 Days to Morning Glory. For a more intensive study, there is a 17-part video series on St. Louis De Montfort’s book, True Devotion to Mary.

Anne Collins is a speaker in the Cincinnati area, focusing primarily on devotion and consecration to the Blessed Mother. From 2005 – 2015, she lead hundreds of people through St. Louis de Montfort’s spiritual classic, True Devotion to Mary. Her program was reviewed by the acclaimed teacher, author and retreat master, Father Basil Cole, OP, and is now available as a 17-part DVD series. Anne, her husband and five children are members of St. Gertrude Parish in Madeira. This article was orignally written for On a Mission to Love, onamissiontolove.com and republished with permission.