VATICAN CITY — When Pope Benedict XVI visited ground zero in 2008, he knelt alone and prayed inside the cement-walled crater where the World Trade Center once stood.

As a sign of bringing light and hope to the dark memory of 9/11, the pope was to light a large beeswax candle adorned with his papal coat of arms.

That simple symbolic act, however, required lots of preparation and a few excruciating seconds of uncertainty.

Martin Marklin from Contoocook, N.H., has been making liturgical candles for U.S. dioceses and churches since 1985 as well as for events during stateside papal visits.

His candles are works of art — seamless and smooth because they’re hand-dipped after they’re released from their molds. They can be hand-carved, decorated with wax inlay or brushed with glittering gold leaf.

Marklin told Catholic News Service about how he was commissioned — just a few weeks prior — to provide the 9/11 memorial candle for Pope Benedict’s April visit to ground zero.

The first worry was transport. Wax candles are extremely delicate and they can easily break, crack, melt, bend or get dents. He had to find a reliable shipper from his New Hampshire factory who could get the candle and a backup copy to New York safely and on time.

With three days to go before the event, the candles were put in a special container on a FedEx flight from Manchester. However, the plane broke down and the cargo had to be taken off and loaded onto a different plane. The papal payload, unfortunately, got lost and sent on a flight to Memphis, Tenn.

Marklin got on the phone with FedEx right away and said he found “a good Catholic executive” who worked a miracle and got the shipment to New York late Aug. 18 for the Aug. 20 service.

When the candle safely arrived, Marklin was then concerned about how it would be lit. It was Pope Benedict’s desire to light the candle himself, and Marklin wanted to make sure it could be done right. Lighting a candle may not seem like a big deal, but given the huge number of people watching and the importance of the event, the lighting needed to be dignified, smooth and actually result in a flame, he said.

The event organizers took Marklin’s advice and supplied a brazier and a taper for the pope to light the candle.

However, on the big day, the server was holding the taper in such a way that even though it had a glass draft protector, a breeze blew out the flame.

Msgr. Guido Marini, master of papal liturgical ceremonies, and the acolyte looked at each other. There was no light!

But, instead of panic, the monsignor reached into his pocket and pulled out a plain disposable lighter and helped the pope light the flame.

Msgr. Marini’s resourcefulness saved the day, but Marklin said he was disappointed that the thing he was trying to avoid — a tacky lighter — was the light’s source.

He told CNS that before he shipped the candle, he carved the initials of his four children in the candle base because “If we’re going to have a world to pass on to our children, we need to pray for peace.” 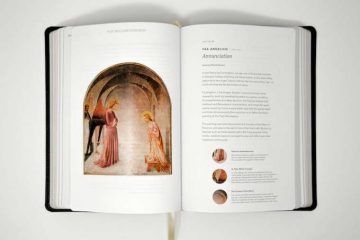