WASHINGTON (CNS) — Daniela doesn’t remember much about coming to the United States from her native El Salvador with her parents when she was 3 years old.

“The only thing I remember is the dress I wore when I got on the plane,” she said.

Daniela, now 19, is a sophomore at Trinity Washington University. Her college costs are paid for in large part by a scholarship from “TheDream.US” fund. She is one of about 100 “Dreamers” enrolled at the Catholic college, which is women-only for its undergraduate studies but admits men to its graduate programs.

She hasn’t declared it yet, but Daniela, who asked that her last name not be used for this story, wants to be a double major — one of those majors being in education.

“But I can’t see myself teaching elementary school my whole life,” she told Catholic News Service in a Dec. 5 interview. For her, that means graduate and post-graduate studies, so she can be a college professor “and do my own research.”

Dec. 5 was the same day that Dreamers descended upon Capitol Hill for a workshop and to lobby members of Congress to pass a “clean” DREAM Act.

DREAM is an acronym for Development, Relief and Education for Alien Minors, which would create a path to citizenship for those, like Daniela, who have been protected by the Deferred Action for Childhood Arrivals program, known as DACA.

The clean part of the DREAM bill? No amendments that would lessen the bill’s impact or make it problematic, at best, to pass. Congress needs to take such action to preserve DACA after the Trump administration announced the program will end in March.

“I know they (opponents) want border security” to be included in any bill, Daniela said. Doing so, she added, would harm her parents, who also are from El Salvador. Since she and her parents arrived in the United States, Daniela now has a baby brother and baby sister — both of whom are U.S. citizens.

Daniela described an uneventful childhood growing up in a close-in suburb of Washington. She recalled that when she was in middle school, her parents would tell her, “Don’t worry, we’ll be here for you.” She said she never quite understood at the time what they meant, since they had always been there to begin with.

The first time Daniela said she started feeling different from everyone else as an immigrant without legal documents to be in the country was as a high school junior. That’s when she started researching colleges and scholarship availability, only to learn that most scholarships required the student to be either a U.S. citizen or a documented immigrant. “That’s what got me frustrated,” she noted.

However, a counselor at her school told her about TheDream.US scholarships. “You have a grade point average better than what they need, you have all the extracurricular activities,” Daniela said the counselor told her. Among other things, she had been captain of her high school’s lacrosse team — and, ironically, involved in her school’s ACES club, short for Achieving Collegiate Excellence and Success.

The biggest obstacle for Daniela at the time: “Six essays! Now that I’m in college, six essays seems like no big deal. But in high school … !”

TheDream.US seeks “partner” schools, either public or private, so that dreamers can be clustered at particular colleges and receive whatever academic and social supports are necessary. Trinity was the first college in the District of Columbia to sign on as a partner school — and, after five years, is still the only one, according to Trinity spokeswoman Ann Pauley.

With 100 Dreamers in the 1,000-student undergraduate program, 50 of them freshmen, “it has changed the demographics” at Trinity, Pauley said. What had been a majority-African-American student body, most of whom lived within commuting distance of the school, is now more diverse and more geographically far-flung.

“And we think that’s a good thing,” she added.

What made Daniela choose Trinity? “My parents are ‘helicopter parents,'” meaning they hover over their children’s school lives, she replied. “The closer, the better.” Her commute from home is plus or minus 30 minutes depending on traffic.

Sadhana Singh, another Dreamer, wrote in Trinity’s campus magazine that she had arrived with her parents from Guyana when she was 13 years old. They moved to Georgia and she finished near the top of her class in high school. But Georgia’s state-funded universities were off-limits to immigrants in the country illegally and she was “ineligible for in-state tuition and any kind of financial aid, loans and scholarships,” Singh said.

But Singh gained DACA status in 2012, which “refilled my diminishing well of hope,” she added. By that time, she had been seven years out of high school with no chance in sight of a college education.

Her scholarship from TheDream.US allowed her to enroll at Trinity in 2014. Now a senior, she expects to graduate on time. Singh also was part of a busload of Trinity students being shuttled to a nearby subway station to lobby at the Capitol for the DREAM Act. 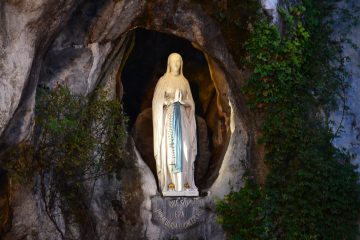