VATICAN CITY — The U.N. Committee on the Rights of the Child continued to insist that the Vatican compile and publish detailed statistics on clerical sexual abuse of minors and that the pope, as head of the church, can and should order Catholic dioceses and religious orders around the world to implement all the policies of the U.N. Convention of the Rights of the Child.

The committee, which spent an entire day Jan. 16 questioning two Vatican representatives, also urged the Catholic Church to revise the Code of Canon Law to make it mandatory that bishops and religious superiors report suspected cases of sexual abuse to civil authorities, even in countries where civil law does not require such reporting.

The Vatican always has insisted that church law requires bishops and religious superiors to obey local laws on reporting suspected crimes; however, it also has said that where reporting is not mandatory and the victim does not want to go to the police, the victim’s wishes must be respected.

The “concluding observations” of the committee, which monitors compliance with the Convention on the Rights of the Child, ratified by the Holy See in 1990, were published Feb. 5.

A statement published by the Vatican press office the same day said, “The Holy See reiterates its commitment to defending and protecting the rights of the child, in line with the principles promoted by the Convention on the Rights of the Child and according to the moral and religious values offered by Catholic doctrine.”

The committee urged the Vatican to release all its files on clerical sexual abuse cases in order to allow public scrutiny of how cases of alleged abuse were investigated and judged, how offenders were punished and how victims were treated.

“The committee is gravely concerned that the Holy See has not acknowledged the extent of the crimes committed, has not taken the necessary measures to address cases of child sexual abuse and to protect children, and has adopted policies and practices which have led to the continuation of the abuse by and the impunity of the perpetrators,” the U.N. report said.

Throughout the report, the committee condemned what its members viewed as a “code of silence” surrounding the cases and claimed “the Holy See has given precedence to the preservation of the reputation of the church over children’s rights to have their best interests taken as a primary consideration.”

Testifying before the committee in January, Auxiliary Bishop Charles Scicluna of Malta, the former investigator of alleged abuse cases in the Congregation for the Doctrine of the Faith, said the Vatican knows “there are things that need to be done differently,” particularly to address concerns about whether a local bishop or religious superior has covered up cases of alleged abuse.

“Only the truth will help us move on,” he told the committee.

Archbishop Silvano Tomasi, the Vatican representative to U.N. agencies in Geneva, also testified and told the committee that new rules and guidelines adopted under Pope Benedict XVI and Pope Francis, “when properly applied, will help eliminate the occurrence of child sexual abuse by clergy and other church personnel.”

The committee’s “concluding observations” said the church’s procedures for dealing with suspected cases of abuse are so hostile to children and their parents that some have reported being “re-victimized by the church authorities.”

The committee’s report also objected to confidentiality being “imposed as a condition of financial compensation,” although Bishop Scicluna had told committee members that in the vast majority of cases, the compensation is awarded by a court, which sets the terms.

Archbishop Tomasi told Vatican Radio Feb. 5 that his first reaction to the report was “surprise because the negative aspect of the document they produced makes it seem that it was prepared before” he and Bishop Scicluna testified in January. “In fact, the document doesn’t seem to have been updated to take into account what has been done in the past few years” by the Vatican and by individual bishops’ conferences.

“The church has responded and reacted and will continue to do so” to protect children and end the scandal of clerical sexual abuse, the archbishop said. “We must insist on a policy of transparency and zero tolerance for abuse because even one case of the abuse of a child is a case too many.”

(“The Archdiocese of Cincinnati has made it a practice for more than a decade to report all allegations of child abuse by Archdiocesan clergy, employees, or volunteers to the prosecuting attorney of the appropriate county, no matter how long ago it happened,” noted Archdiocese spokesman Dan Andriacco.)

In other areas concerning the rights of children as set forth in the U.N. convention, the committee:

— Praised a pledge to consider “withdrawing the discriminatory expression ‘illegitimate children’ which can still be found in canon law.”

— Insisted the church and its teaching on sexuality “contribute to the social stigmatization of and violence against lesbian, gay, bisexual, and transgender adolescents and children raised by same sex couples.”

— Said the rights of children to know their biological parents have, in some cases, been violated by Catholic adoption agencies and in cases where the biological father is a priest. The policy of some Catholic convents and hospitals to let mothers know they can anonymously leave unwanted babies and any other practice that gives parents anonymity should be only a last resort, it said.

— Expressed concern about adolescents “separated from their families and isolated from the outside world” when they enter minor seminaries run by some religious orders.

— Asked the church “to review its position on abortion, which places obvious risks on the life and health of pregnant girls” and to amend church law to identity “circumstances under which access to abortion services can be permitted.”

Archbishop Tomasi commented that the preamble of the Convention on the Rights of the Child “speaks of the defense of the life and of the protection of children before and after their birth,” yet “the recommendations that are made to the Holy See include changing its position on abortion,” which “seems to be a real contradiction.”

— Suggested the church needs to “overcome all the barriers and taboos surrounding adolescent sexuality that hinder their access to sexual and reproductive information, including on family planning and contraceptives.”

The Vatican press office said the Holy See would give the U.N. committee’s report, which is not binding, a “thorough study and examination.”

“The Holy See does, however, regret to see in some points of the concluding observations an attempt to interfere with Catholic Church teaching on the dignity of human person and in the exercise of religious freedom,” the statement said.

Let us meet Jesus, not just talk about Him

Pope Francis: Disabled people must have access to the sacraments, Catholic parish life 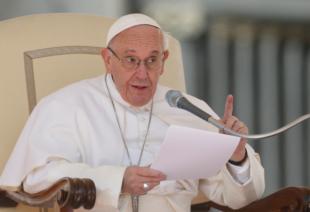