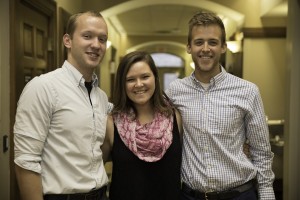 Discerning vocation can be a daunting task, but the University of Dayton’s senior Chaminade Scholar Honor students met this challenge head-on in by hosting The Art of Being: What Does Vocation Really Mean?

Through a vast array of interactive experiences within the conference, senior Chaminade Scholars demonstrated how faith, reason and vocation can be animated within students’ lives by interacting in an interdisciplinary community of learners.

The Chaminade scholars were inspired by Pope Francis’ continual invitation to youth around the world to embrace a fresh perspective to the ‘call to holiness’ through a deeper appreciation for understanding of ‘one’s vocation’ in life. The 21st century presents vast new challenges and opportunities for young women and men. The aim of the UD student conference was, “to break down the traditional understanding of vocation and expand the idea to the various ways in which vocation plays a different role in each of our lives in each of the things we do,” the Chaminade Scholars said. “Vocation is the intentional listening to who we’re called to be and living out our truest life,” said Tom Tappel, Chaminade Scholar.

An integral dimension of the event for the Chaminade Scholars was sharing their favorite learning moments with other students at UD. “We felt that the topics of our classes, such as prayer, beauty and citizenship, were huge topics for anyone discerning their vocation,” Tappel said.

Understanding that vocation can be an overwhelming topic, Tappel said the Chaminade Scholars wanted “to ease the burden of needing to know everything right now.” The goal was to make the program’s content accessible to all students, no matter where they were on their vocational journey. Toward this end, the Chaminade Scholars thought it would be important to include topics such as “the uncertainty of the future, the messiness of figuring out what to do and the continuation of the journey after college,” Tappel said.

The event included small-group sessions, prayer and an alumni panel to help students learn “what questions to ask, where to look for answers, and how to look at their lives through the lens of vocation,” the Chaminade Scholars said. 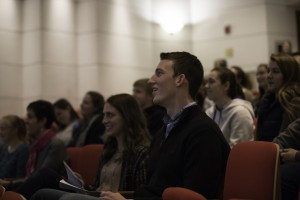 The highlight of the event was the keynote speaker, Seàn-Patrick Lovett. Lovett has over 40 years working with Vatican Media in Rome, Italy, and is not only professor of social communications at the Pontifical Gregorian University in Rome but travels to dioceses around the world giving workshops on pastoral communications. His perspective on vocation was highly anticipated, as his experience serving five popes and working with Mother Theresa gave him critical spiritual insight.

The Chaminade Scholars invited Lovett to speak at their event because they had met him previously on their pilgrimage to Italy where he spoke to them about the journey of vocation. For Lovett, discernment is central in discovering vocation. “More than anything else, it’s about listening,” Lovett said. “In terms of challenges, I think that’s one of the biggest challenges of our younger generations. And even for me.”

After Lovett’s keynote speech, students shared the effect it had on them. “I am speechless. Absolutely beautiful,” said one student. Another student said that from now on they will “be more open-minded to who I am and what I am called to do by questioning myself.

Lovett’s engaging speech, and the conference as a whole, had far-reaching impact within the University of Dayton community. When Tappel attended Mass the next day, the university president congratulated the Chaminade Scholars on “how many different corners of the university were talking up our work from the day before,” Tappel said. “Hearing this, I understood that the conference did what we set out for it to do. We were able to extend the conversation about vocation outside of our group and into the greater UD community.

While the students took the lead in creating content for the conference, the event would not have been possible without the financial support of several university programs and departments such as Campus Ministry’s Program for Christian Leadership, Career Services, Chaminade Scholars Program and University Honors Program. The students also received funding from a NetVue Vocation Exploration Grant. The diversity of these supporting programs shows how broad vocation’s impact can be.