It also creates the National Climate Task Force, which the White House says will bring together “leaders from across 21 federal agencies and departments to enable a whole-of-government approach to combating the climate crisis.”

Biden also issued executive orders that will require the United States to rejoin the Paris Agreement and will cancel the Keystone XL Pipeline project.

In the Feb. 3 statement, Archbishop Coakley offered support for some of the Biden administration’s environmental priorities:

“In his encyclical Laudato Si’, Pope Francis presented Christians and all peoples with an integral ecology oriented towards the common good, drawing on the longstanding tradition of Catholic social teaching and rooted in the Gospel of Jesus Christ,” Coakley said. “He warned us of the danger of a ‘green rhetoric’ that often coexists with economic privilege and comfort, emphasizing the need to ‘hear both the cry of the earth and the cry of the poor.’”

Coakley said Biden’s environmental executive orders “resonate deeply with an integral ecology that listens to the ‘least of these’.”

Biden’s orders, Coakley said, will “recommit our nation to robust and integrated climate mitigation policies,” and will “emphasize other environmental realities that deserve greater attention,” including “Clean air, clean water and the conservation of lands, ecosystems, and agriculture” and “Economic growth, clean infrastructure, and opportunities for workers.”

“The swift action to restore regulations for which the USCCB previously advocated—including fuel emissions standards, hazardous air pollutants and the integrity of National Environmental Policy Act—speak of a commitment to restoring public health and the common home,” Coakley said. 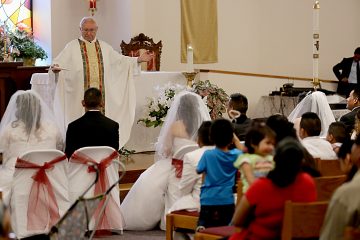