Youth ministry and youth athletics are seen as different, and at times, competing entities in the Catholic system. SportsLeader is hoping to change that.

SportsLeader has been working with coaches to instill values in athletes since 2004 and now the Louisville, Ky.-based non-profit is hosting the first-of-its-kind Director of Sports Ministry Conference from March 30 to April 1 at the Athenaeum of Ohio. The conference is endorsed by the Pontifical Council for the Laity’s Church and Sports section.

SportsLeader Director Lou Judd said the aim of the conference is to promote the creation of a new position in Catholic dioceses or institutions — director of sports ministry.

“If you’re a pizza business, you got to have someone overseeing the pizza,” said Judd. “If 85 percent of our young people are playing sports, that’s kind of where the pizza is. The overwhelming majority of kids are playing sports within the Catholic system. That is the area where the kids are. It merits a more strategic intentional approach. Lets bring the ministry more intentionally to the sports. You might have 20 varsity sports with 20 head coaches. Those are your 20 youth ministers. What’s happening right now is the focus is just winning and competition and that’s good, but we can do more.” 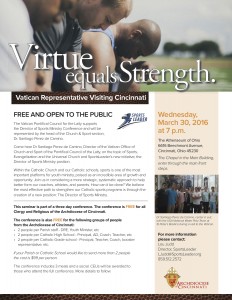 SportsLeader has been encouraging the creation of director of sports ministry positions around the nation. In the Archdiocese of Cincinnati, McNicholas High School Football Coach Mike Orlando is the only person with that title. He said the position is about using sports to prepare young people for the future.

“Football and sports sometime stops. But obviously your relationship with spirituality and the church and Christ goes on well beyond that. We’re trying to prepare our kids for that,” he said. “I think its ok to lead with sports. To show our kids that we can be Christ-like through sports.”

Orlando is one of 10 speakers scheduled to present at the three-day conference, along with a trio of well-known names.

Dr. Santiago Perez de Camino, head of the Pontifical Council for the Laity’s Church and Sports section will speak on the first day of the conference. His talk will be the only portion of the conference open to the general public.

On the second day of the conference Bishop Thomas Paprocki of Springfield, Ill. will say Mass and address the conference. Known as the “Holy Goalie” for his recreational hockey-playing career, Bishop Paprocki has also authored a book about faith and sports.

Other speakers include a variety of directors of sports ministry, SportsLeader personnel, athletic directors and educators. The conference also features three meals and a social.

Registration is $99 through March 15, and $150 after that. Registration is free for all clergy and religious, and the Archdiocese of Cincinnati will sponsor two people each from each parish, Catholic high school, or Catholic grade school at no cost.

The Director of Sports Ministry Conference isn’t the only program in the archdiocese working to fuse faith with sports. The Office of Youth and Young Adult Ministry has implemented a similar but unrelated program for Catholic grade schools with each school athletic department having a spiritual liaison as part of the Youth Athletics Initiative.

Orlando said the motive behind bringing sports and faith together is simple.

“(It is about) having our religion, our faith, on top,” he said. “Everything else just falls into place.”

Evangelist asks, “Do you know Him?” 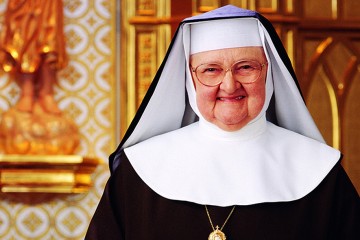